When will Tiger return to play the PGA Tour?

The PGA Tour’s 2019-2020 season resumes at the Charles Schwab Challenge on June 11th, after a three-month lockdown due to the coronavirus. There will be no the grandstands and golf fans will have to rely on TV coverage to watch the tournament.

However, the question on many golf fans’ minds is when and where will Tiger Woods re-start his season? 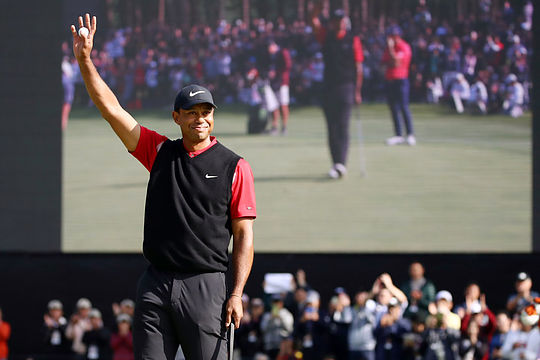 Tiger waves to the crowd after winning his last PGA Tour title at the ZOZO Championship (Credit: PGA Tour)

At The Match: Champions for Charity, we got to see Woods play golf for the first time since March and the results were vintage Tiger. It was his first competitive action in 98 days and he and Peyton Manning held off Phil Mickelson and Tom Brady, 1 up, with the four raising $20 million for COVID-19 relief efforts.

Woods’ game was impeccable with sharp iron play and precision off the tee – missing none of the 14 fairways.

A review of the revamped PGA Tour schedule shows the next tournament following the Colonial is the RBC Heritage at Harbour Town in Hilton Head from 18-21 June, followed by the Travelers Championship in Connecticut, and the Rocket Mortgage Classic in Detroit.

The fifth event on the schedule was supposed to be the John Deere Classic, but the tournament was recently been cancelled in light of coronavirus-related state restrictions.

Looking at Tiger’s past schedules, he has avoided playing many of these tournaments…and with good reason. Over the years, Woods’ playing schedule has always followed a predictable pattern built around his preparation for the four majors. He also refrains from playing three consecutive weeks and rarely competes the week before a major.

Woods also likes to keep us all guessing about his next moves and normally waits until the last minute to commit to a tournament so it’s unlikely any indication will be forthcoming until a week or two before each event is set to begin…especially with the pandemic situation being so fluid, particularly in the US.

You can count on him playing the three majors that have been postponed but remain on the 2020 calendar, namely the PGA Championship at Harding Park on 6-9th August in San Francisco, the US Open on 17-20 September at Winged Foot Golf Club in New York and of course the Masters on 12-15 November at Augusta National Golf Club in Georgia.

Many are predicting Tiger’s first tournament will be at the RBC Heritage. The event is expected to draw a strong field, and Harbour Town has the logistics in place to ensure player safety. Also the commute from Jupiter, Florida, Tiger’s home-base, is not complicated, making this a solid prediction for Tiger’s return to the PGA Tour.

The Memorial on 16-19 July at Muirfield Village Golf Club in Ohio is Jack Nicklaus’ annual tournament, which Woods hasn’t missed when healthy and has won a record five times. We should expect a start there.

The same can be said for the Hero World Challenge on 3-6 December at Albany in the Bahamas. Woods hosts the tournament, and it benefits his foundation so that should be a no-brainer if nothing else gets in the way.

In total the estimate is that, fitness allowing, Woods will feature in between 8-10 events this season with the general consensus leaning towards the former.

However, in this current world of uncertainty no firm projections are possible, yet we can all agree that the golfing world is eager to see more of Tiger, even if it is only through our TV screens for now.