Whitaker thanks her lucky stars

American University graduate Alison Whitaker believes she would not be the player she is today if she had remained in Australia to pursue her golfing dream.

The 25-year-old, who has earned conditional status on the US LPGA, says the American college system prepared her much better for life on tour. 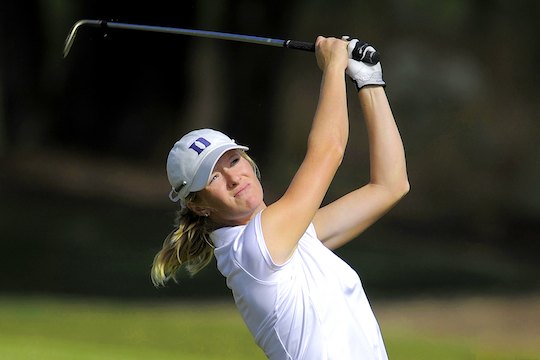 “I think there is a definitely a mentality there that is different to what we have here,” the Duke graduate said.

“I learnt how to win while I was over there and that is something that I wasn’t basically confident with when I left.

“I went on to a team that was expected to win and I kind of clued into that.”

It’s a bold statement from the rookie pro – there are many Australians who have succeeded without attending a US college, yet the likeable Victorian does raise a few valid points.

One key lesson she learnt was that you don’t have to focus on having the perfect swing to get the job done.

“I think the thought process that you don’t need to do anything special to win is actually something that is kind of unique,” she said.

“That has really helped me because I just know that it doesn’t have to be pretty because you can get a good score down on a hole for not doing very much sometimes.”

The Psychology major added she wouldn’t have made the LPGA tour at her first attempt if she had tried to do it, cold turkey, straight off a plane from Australia.

“You just don’t learn as much about the people you are playing against as quickly as you do in college, I think that that is probably the biggest difference,” she said.

“That really helped me going into Q school because I knew half the girls that were playing and so when you know them it kind of personalises it a bit and doesn’t make it quite as daunting.”

The former Golf Australia squad member also points out that just the sheer weight of numbers means the competition is always going to be stronger in America and with that, your own game becomes stronger too.

“It is all the same, the good players here are just as good as they are over there, it is just that you are playing against more of them and it makes it a bit tougher,” she said.

“We have maybe a dozen good players over here and over there it is more like fifty and it is just that the talent pool is bigger.”

Whitaker gained a full card for the secondary Futures Tour but also has conditional status on the LPGA tour. She will attempt to play as many LPGA events as she can.

“I will just try and Monday qualify for a couple of events and then hopefully get into some of the other ones,” she said.

“It really only takes a good week or two to get something under your belt and kick start something.”

Whitaker is a wonderful talent, as evidenced by her selection, twice, in the All Atlantic Coast Conference (ACC) team in America. Duke has also won the NCAA Championships five times.

Yet she is realistic about her 2011 campaign.

“My main goal is just going to be make sure I enjoy the process rather than being too results based,” she said.

“So many girls come out of college and they think I can win and I don’t want to put that sort of pressure on myself in my first year.”