Wilson Golf, the Chicago-based company whose irons have captured 61 Major Championship titles over the company’s illustrious history – more than any other golf club manufacturer – today announced that it has reached an agreement to re-sign PGA Tour young gun Ricky Barnes. The three-year contract was finalized as Barnes finishes his second full season on the PGA TOUR ranked 75th in the world and 64th in the FedEx Cup standings. 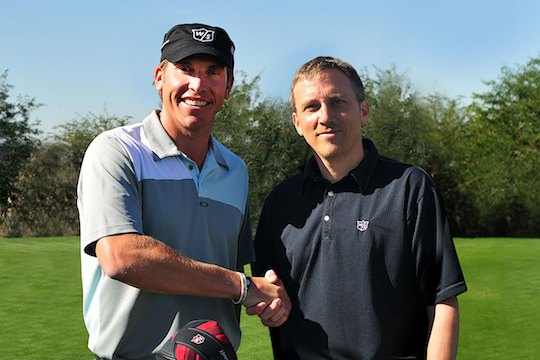 “I’m excited about my partnership with Wilson Golf, a company that has such a rich golf championship history and heritage,” said Barnes. “I’ve played great golf since switching to the Wilson Staff FG Tour irons, and my confidence has translated into success on the course. With a great R&D team working with me, I’m looking forward to achieving even greater success in the years ahead on the PGA TOUR.”

“Wilson Golf is proud to continue its relationship with Ricky Barnes,” said Tim Clarke, general manager of Wilson Golf. “Ricky’s style of play and on-course demeanour couldn’t be a better match for the Wilson brand. He’s working hard, having fun and playing great. In fact, his play has truly connected with the younger, serious golfer and helped that player connect with our legacy of performance.”

Barnes finished ranked 16th on the TOUR in Top Ten finishes with six, and was eighth in birdies (372). His best finishes include a T3 at The Memorial Tournament at Muirfield Village where he shot a tournament low 62, and two T5s at the Verizon Heritage at Harbour Town Golf Links and the Travelers Championship at TPC River Highlands. He finished in 64th place in the FedEx Cup standing.

Barnes burst back onto the national scene during the 2009 U.S. Open at Bethpage Black where he held the lead going into the third round before finishing tied for 2nd place. He holds the record for the lowest 36-hole score in US Open history at -8 under par.