Following the success of Tiger Woods’ backup Scotty Cameron, which sold for close to US$400,000, another piece of golfing history is going up for auction…and this time it’s a big one.

Up for sale is the set of Titleist irons and wedges used by Woods in his “Tiger Slam” era from 2000 and 2001. While Woods missed out on winning all four majors in the 2000 season, he was soon able to do the next best thing. 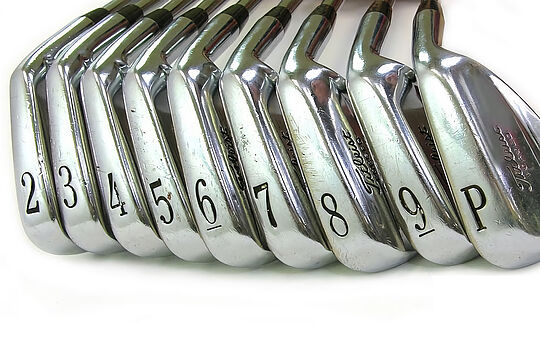 After securing the last three majors of 2000, including his 15-stroke victory at the US Open, he won the US Masters in 2001 to hold all four majors at once. It’s a feat that still seems as outrageous and improbable as it did 20 years ago with Ben Hogan the only other player in history to win three majors in one year and that was in 1953.

The set includes Titleist Forged irons (2-PW) and two custom Vokey wedges, both stamped with “TIGER”. The 58 degree wedge is bent to 56 degrees and hand stamped “56*”.

And so how did these historic clubs get into the hands of their current owner, Texas businessman Todd Brock? Well according to the lot description at Golden Age Golf Auctions they came via Woods’ Titleist reps at the time.

“After winning the 2001 Masters Tournament, Tiger held all 4 Major Championship titles at the same time – what we now call the Tiger Slam. 7 weeks later, at the Buick Classic at Westchester Country Club in New York, Titleist Director of Player Promotions Rick Nelson and Titleist VP of Player Promotions Steve Mata delivered to Tiger Woods the new set of irons and wedges that Titleist made for him.”

“And the old clubs? The ones just used to complete the greatest feat on a golf course since Bobby Jones’ Grand Slam in 1930? Tiger gave the clubs to Nelson and Mata, and Mata brought them home with him. It was widely known at Titleist, within Tiger’s camp, and within the industry that Mata owned the Tiger Slam irons before he infamously put them up for auction in 2010.”

Incredibly Brock paid just over US$57,000 at auction but with another decade of hindsight and Woods’ legacy increasing exponentially following his 2019 Masters win and his near-fatal car crash last year, the clubs could well nudge the million dollar mark this time around.