Woods offers advice to Day ahead of WGC Cadillac

It was clear during the opening two rounds of last year’s Open Championship just how well Jason Day gets on with Tiger Woods.

South African Louis Oosthuizen was like the odd man out for two days last July around the Old Course at St. Andrews as Day and Woods were inseparable in between shots. 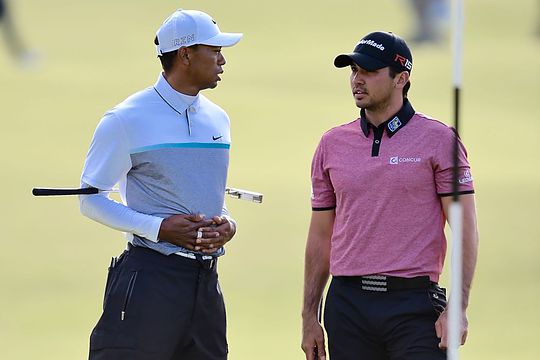 And Day has revealed just how close he’s got to the 14-time Major winning Woods having phoned Woods just recently and chatted for some 50 minutes with the Star Spangled American.

“I called him. I just called him (Tiger). He had nothing else, I guess,” said Day that saw the interview room here at Trump Doral erupt in laughter.

Since becoming friends with Woods the reigning PGA Championship champion has begun wondering how and why Woods was able to peak his game at the right time, what was his mind-set and the effort he put into winning 14 Majors and 79 PGA Tour titles.

“I think the biggest thing is — I’ve never really talked to anyone about peaking and what they do to peak,” said Day.

“Obviously I want to peak every week. That would be great. Try and win every week. I don’t see — obviously you want to be peaking at those events, but, how come Tiger won all those times, you know.”

“I think you can do both, and it’s all the mind-set and effort that you put into it.”

“So that’s what I talked a little bit to Tiger last week on the phone, and just speaking to him about — with regards to all this stuff, practice and balancing and dominating for so many years. If you’re going to pick a guy’s brain, he’s the guy.”

“And every time — I can’t count how many times he said effort and mind-set and everything, had to do a lot with the mind. So just goes to show how strong his mental toughness was when it came to not only playing PGA Tour events but playing major-level tournaments, as well.”

“So I think that’s the last piece for me. Because I know that my body is — I’m slowly changing the way my body looks with regards to obviously the outer shell right now, but the inner stuff, like my core and everything else is coming along nicely. I’m eating the right stuff and I’m practicing very, very hard.

“From there, the last piece, I think the biggest piece for me is to not get in my way. I think once I’ve realised or once I learn to control my mind, especially out there, it’s going to be, I’m not going to say — I would say that it’s going to be a lot easier for me to go out there and play golf instead of fighting myself, yeah.”

The current World No. 2 ranked Day had turned pro in 2006 but then it took him four years before his first PGA Tour success in 2013 at the HP Byron Nelson Championship in Texas.

However it has been the past two years the now 28-year old has really blossomed first capturing the 2014 WGC – Accenture Match-Play Championship ahead of winning a maiden Major last August at Whistling Straits.

A fortnight later, and in his first event since being handed the Rodman Wanamaker Trophy, Day won the Barclays Championship, the opening event of the 2015 FedEx Cup Play-Off Series.

Day had gone close to his first Major triumph at the 2011 Masters while there was the bitter disappointment at St. Andrews a year ago after missing out by a shot in forcing his way into The Open play-off.

And now that Day’s had such a long conversation with Woods, and a player who has long guarded his privacy, the now father of two believes he may have located the last piece of his mental jig-saw puzzle.

“I’ve always said it that once I improve the mental game for myself, this is the last piece of the puzzle for me, I believe,” said Day.

“‘ll be able to go out there and just kind of kill it.”