As some social media commentators have pointed out, perhaps it’s a little macabre to be posting images of a person recovering from a life-threatening car crash.

However when you’re the greatest golfer of all time, it’s almost impossible to hide from prying eyes. 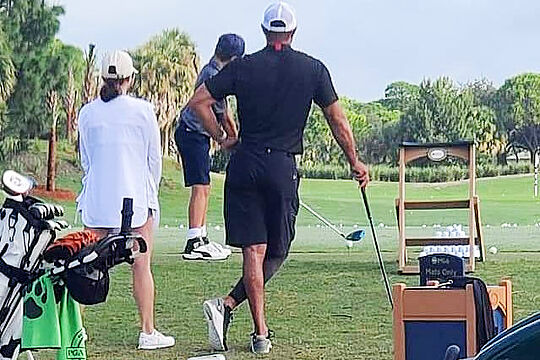 Facebook user Mack Williams has set the golf world alight with photos he posted of Tiger Woods watching his son, Charlie, practice at a recent junior golf tournament in Florida.

The grainy images are the first look at the 15-major winner we’ve had in a few months and show some progress in his recovery from a near-fatal car crash in February this year.

Woods, who turns 46 in December, now appears to be able to put weight on both legs without the crutches he has been forced to use for the past six months. Also of note is the sleeve on his leg which replaces a cast that has been used to repair the multiple fractures he suffered as a result of the accident.

A report in People magazine from an “insider” suggests that Woods’ recovery is well on track.

“Tiger has made a remarkable recovery in the past few months, but it’s even more significant lately. It’s like every day he can do more, he can handle more, the pain is less, and he’s feeling better.”

Woods clearly has a long road in front of him, however his comeback win at the 2019 US Masters, following years of potentially career-ending surgery, means that you can never rule him out.

While the 82-time PGA Tour winner hasn’t been able to play tournament golf, he recently offered his services at the Ryder Cup where the US team won for the first time since 2016.