You have to hand it to the great man…he knows how to celebrate.

We’re talking about Tiger Woods, of course…and only he could have chosen to celebrate his US Masters win in the manner that he did. 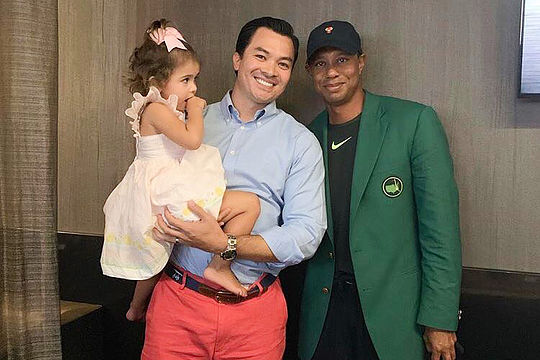 Woods poses with customers in his Masters jacket (Credit: Twitter)

While even he thought it might be a day that would never come, Woods was out to make the most of his 15th major championship success.

The former long-running world No 1 turned up at his restaurant – not one where he merely eats, but one that he owns – and, you guessed it, he was wearing the famous Green Jacket, saved for the Masters champion.

While this was his fifth time winning the Masters title, Woods stunned patrons when he wore the jacket to the Jupiter, Florida restaurant.

And word is that Woods was ‘rocking it’ as the jacket went nicely with his shorts and a black hat with the cap logo actually the character on his driver headcover, Frank The Tiger.

Soon there was a photo of the aforementioned get-up doing the rounds. The only problem was, the little girl in the photo that Tiger posed for, looked less than impressed with the smiling golfer who stopped to pose with them.