The 2019 Masters champion will not be able to defend his title until November, however, Tiger Woods is still trying to keep the annual April Masters weekend alive during quarantine starting with the traditional Champions Dinner and even a recreation of the famous Magnolia Lane at his Florida home.

In an online interview with GOLFTV, Woods said that he’s been able to train and keep fit with an extensive exercise routine including long bike rides and that his back is feeling great after he was forced out of the Players Championship a month ago. 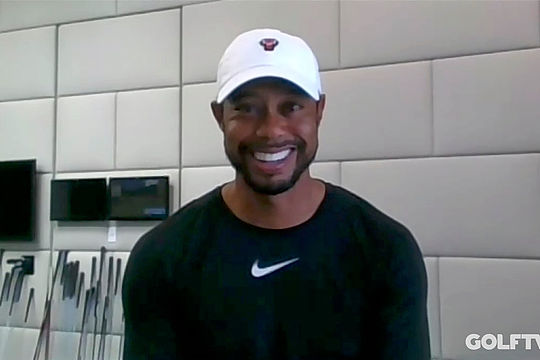 Just like the rest of us, Tiger and his family have turned to certain distractions during their time locked inside the house.

Tiger said his girlfriend Erica and his kids Sam and Charlie recently finished a 2,000-piece puzzle and have now graduated to a 3,000-piece puzzle…although the five-time Masters champion revealed that his partial colour-blindness meant that he hasn’t been much help during puzzle time.

Ever the competitor, Tiger has also challenged his son Charlie to a putting competition in the backyard for the Masters green jacket in between home schooling assignments.

Woods says he and his family have been trying to find positives in what has otherwise been a trying time and that he has turned to some of the lessons taught to him by his late father.

“Trying to keep an interest throughout the day is sometimes challenging,” said Wood.

“I was a military brat and my Dad use to say it’s not ‘day-by-day’ but ‘meal-by-meal’ during difficult times and we’ve kind of adopted that during this pandemic.”

Woods’ local course, the Medalist Golf Club, has remained opened, which has allowed the former No.1 to get out and hit balls within the constraints of social distancing rules.

“I’ve been fortunate that Medalist is open and have got out and played and done something active. Just doing some exercise and piece of mind. I’ve seen some pro’s out there but it’s weird practicing with no end goal to get ready for.”

With no clear date set for the PGA Tour season’s restart, Woods is just trying to make the best of the lockdown situation.

“We all need to keep safe that’s the priority and I’m enjoying doing the unusual things at home with my family that we might not otherwise have the time to do. Everyone needs to stay safe and hang in there.”