Tiger Woods has hit his first golf shots in public since last February but the 14-time Major Champion is still no closer to returning to full competition.

Woods was guest of honour at Big Cedar Lodge on the outskirts of Springfield in the US State of Missouri to unveil plans for his first public course design. 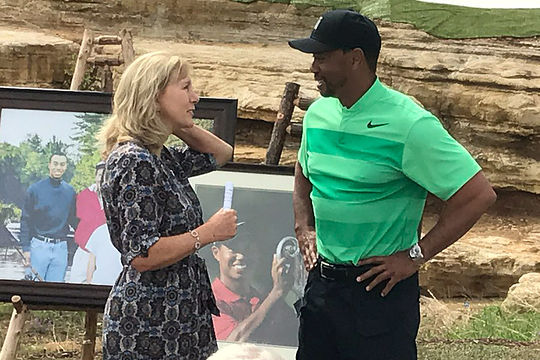 The course is being named Payne’s Valley in honour of the Missouri-born Payne Stewart who won two US Opens and a PGA Championship before his death in a 1999 plane crash shortly after he and Woods were members of the victorious USA Ryder Cup team.

“I grew up on a Par 3 course in Long Beach, California,” said Woods. “It was lit at night, just like most of the people were. We didn’t have a whole lot of money, and that’s where I learned how to play, so for me to be able to design a public course, that’s near and dear to my heart.”

“My favourite golf in the world is played on the ground, which is links courses. Everyone knows I’m dedicated to the things I care about and this is one.”

“So to have an opportunity to represent Payne and his entire family and what he has meant to the state of Missouri, the Ozarks, it’s an honour for me.”

Stewart’s Australian-born widow, Tracey was on hand and there was an emotional moment when Woods hugged her.

Stewart’s wife, Tracey, says she’s touched by the naming of this new course.

“I express my gratitude for what you are doing to honour Payne,” said Tracey Stewart. “This area means so much to him. His sisters still live here in Springfield. I know he is looking down from heaven today and he is so proud.”

The 41-year-old Woods was then cheered on as he hit just wedge shots into a stunning par three laid out in front of a steep cliff face and waterfall.

But Woods missed the green with his opening wedge shot falling short into water.

“The first shot was crap, hit it in the water,” said Woods.

His second try drew applause with Woods hitting the ball to within tap-in distance.

And while Woods did not comment on his return he provided a health update.

“I have good days and bad days,” he said.

“I’ve had three back operations, and that’s the nature of the business unfortunately. That’s all I can say.”