It’s been quite a year for Cameron Smith and now the Queenslander has been named the Greg Norman Medal winner for the second time in the past three years at the PGA Awards night in Brisbane.

Smith enjoyed a stellar 2022 including his first major victory at the 150th Open Championship in July along with wins at the Sentry Tournament of Champions, where he set a PGA Tour record with his 34-under victory, and the Players Championship in March. 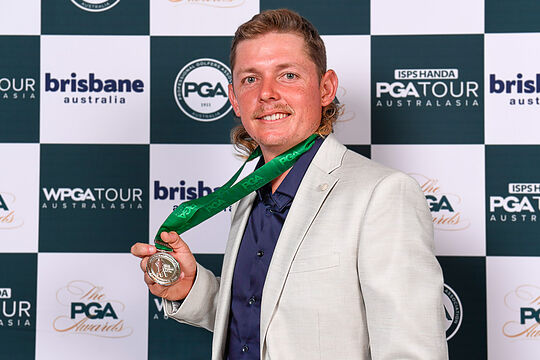 Smith moved to World No.2 following his triumph at St Andrews but now languishes at No. 3 thanks to his controversial move to LIV Golf where he is currently unable to accumulate rankings point despite his $4 million win at the LIV Golf event in Chicago and a 5th place in Boston.

“I’ve got to thank my family first and foremost. Mum and Dad gave up a lot for me to play golf,” said Smith about his humble beginnings in Brisbane.

Also recognised on the night was Smith’s long time coach, Grant Field. Field, the Director of Coaching at Pelican Waters Golf Club on the Sunshine Coast, was named PGA National Coach of the Year – High Performance, for the second year in a row.