Former Australian Amateur champion, Cameron Davis, has announced he has turned professional and will make his debut at this week’s Queensland Open before heading to the US for Stage Two of the Web.com Tour Qualifying School.

The 21-year-old Sydneysider confirmed his decision to turn professional a day after reaching a career-high No.4 in the world amateur rankings. 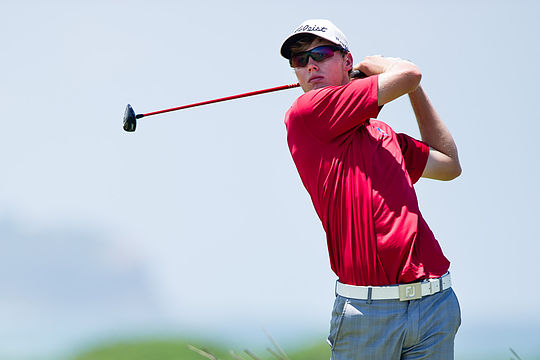 “I’ve gone up in the rankings a little bit with some recent performances and have been getting noticed a bit more for my golf in different places, so in terms of opportunities around the world, I think now is the best time,” said Davis in a Golf NSW media release.

In making his announcement Davis credited his family and those who’ve helped shape his career to this point, right from his original coach, Jim Ballard at Killara Golf Club, and the support he received from the Roseville Golf Club, where he first won a club championship at age 13.

In more recent times Davis has been under the watchful eye of Khan Pullen whilst being a member of the Golf NSW High Performance program overseen by Dean Kinney.

“I’d also like to give a huge thanks to my coach Khan Pullen, who has just been unreal. He and Dean have taken my game to another level and I can’t say enough about them as people, not just coaches.”

Pullen followed Davis through the Jack Newton Junior Golf events and in 2013 took over the coaching ranks and says Davis is ready for the transition.

“Cameron played regularly in Jack Newton Junior Golf events during his junior golf career but is wasn’t really until as a 17-year-old in his final junior year, that he made an impression whereby he earned selection into the NSW Junior Boys Team in 2012,” said Pullen.

“This is where I first become involved with Cameron and his development. At this time he was being coached by Australian PGA Member Jim Ballard who did a wonderful job of nurturing Cameron’s natural athleticism and creativity.”

“The strengths of his game were his length, his shot making abilities and he was a streaky hot putter. But the most compelling things that stood out to me was Cameron’s passion for playing the game and love of competition.”

“He has been willing to listen and commit to making the necessary changes that have made his game much more consistent than previously. He showed great grit to stick with making the changes even though at times he really struggled to make them.”

“It is great being a part of Cameron’s team while he is on this journey of chasing his dreams on the golf course and I look forward to the next phase of his career as a tour professional.”

Davis’ announcement is perfect timing with the start of the Australian summer of golf underway but before teeing it up at Royal Sydney for the Australian Open, Davis will play in the US PGA Tour’s OHL Classic at Mayakoba in Mexico.