The shock news of the passing of ‘Spin King’ Shane Warne has not only taken the cricket world by surprise but some of the greats in golf have also broken down in tears in learning of Warne’s passing – at age just 52.

“Warnie’, as he was known affectionately to everyone around the globe, died of a heart attack while on vacation in Thailand. 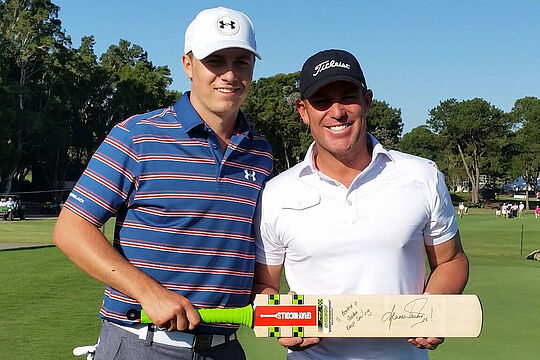 The Aussie-born cricketing great, who took 702 Test wickets in his career, had been last seen at a golf event when he teamed with Kiwi Ryan Fox at the annual Alfred Dunhill Links Championship last October in Scotland.

And speaking of Fox, one of the first congratulatory text messages the New Zealander received soon after his recent DP World Tour’s Ras Al Khaimah Classic win at Al Hamra was from his Dunhill Links partner.

Warnie had been a great supporter of the annual team’s event since 2001 when the pro-amateur format of the tournament replaced the former Dunhill Cup. The new format was a great chance for some of the best cricketers in the world to compete alongside some of Europe’s best golfers, including the likes of Ian ‘Beefy’ Botham and Michael Vaughan as regular Scotland starters.

In the earlier years of the event, Warne partnered fellow Aussie Peter O’Malley and their golfing relationship became so strong that Warnie caddied for O’Malley when ‘POM’ made his Senior British Open debut in 2015 at Sunningdale.

An extended break that year between Ashes Tests allowed Warne time on the golf course, but at that time he was, in his own words, just carrying a bag.

There’s a great photograph taken in 2002 at the Monte Carlo Golf Club when Warnie and fellow Australian cricketer Steve Waugh joined with Gary Player in the pro-am for the European Seniors Tour Monte Carlo Invitational.

The Victorian has also been a regular guest at golfing charity events and pro-ams including later in 2015 when he and Aussie rugby legend, Nick Farr-Jones joined the group featuring Jordan Spieth, the-then reigning Masters and US Open champion, and reigning Australian Open title-holder. There is a great shot of Spieth teeing-off with a cricket bat.

Warnie and golfing legends Tiger Woods became friends having met a few times when Woods travelled to tee-up in Australia. Two years ago, Warnie shared a picture with Woods taken at a pro-am dinner in Melbourne.

In subsequent interviews following their meeting, Warnie spoke about the time the duo spent together and their similarities. Warnie revealed he and Tiger Woods spoke about the mental aspect of sports and overcoming setbacks. Warne also revealed that the duo talked about entertaining people and messing with their opponents was something that they certainly enjoyed.

“Devastating news about @ShaneWarne passing today. Our thoughts go out to his family and friends. Legend.”

I loved and enjoyed every single second I got to spend with this guy. What a legend. RIP my friend…… ” tweeted Trevor Immelman.

“There is a VOID now in cricket which will not be filled easily. Possibly the best Spinner to ever grace the field is gone. His vision and experience to never be shared with us again explaining the gr8 game only as he knew it. THANKS Shane for the excitement U gave us. RiP,” said Scott Hend.

“Shocked to wake to this news, what an absolute legend and Australian icon. RIP Warney,” added Aussie golfer, Wade Ormsby.

“Such a shock to wake up to the news of Warnies passing this morning. A legend of the game of cricket and one of the nicest guys you will ever meet. Was a pleasure to get to know him the last few years and I will always cherish the memories we had. RIP Warnie,” tweeted New Zealander Ryan Fox.