Although Payne Stewart sadly passed away in a freak plane accident five years before Johnson’s rookie year, the World Golf Hall of Famer and 11-time PGA Tour champion made an indelible mark on Johnson’s life.

And so it was an emotional moment for the 44-year-old when he was recently announced as the 2020 Payne Stewart Award recipient. 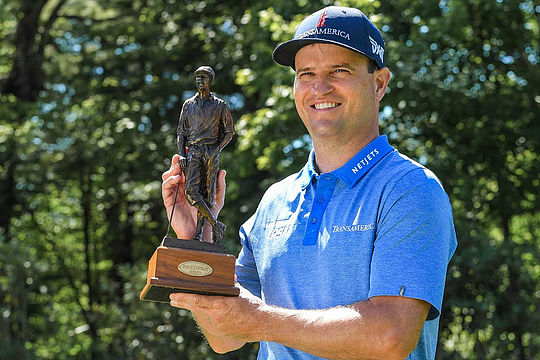 Johnson initially thought the video conference call had something to do with the Ryder Cup where he is one of the assistant captains but it quickly became apparent it was something else, and it was then that an emotional Johnson broke down in tears as Stewart’s daughter made the announcement.

“I never got to meet Payne, but I loved him. I loved how he played the game certainly as a competitor but then how he lived his life off the golf course – he’s the model,” Johnson said.

“I remember going to the TOUR Championship and the Payne Stewart Award Ceremony my rookie year and thinking, ‘This is the pinnacle of a PGA TOUR player’s career.’ It’s about how you utilise the gifts you are given, and I know Payne lived that way.”

“I am deeply grateful and honoured. I don’t like being in the limelight a whole lot, but I hope in this regard I can at least be a small piece of his legacy.”

The Payne Stewart Award is presented annually by the PGA Tour to a professional golfer who best exemplifies Stewart’s steadfast values of character, charity and sportsmanship. Stewart, an 11-time PGA Tour winner and World Golf Hall of Fame member, died tragically 21 years ago during the week of the Tour Championship in 1999.

Johnson will be honoured at the Payne Stewart Award Ceremony on September 2nd in the week leading up to the season-ending Tour Championship.