Zach Murray has flown under the radar in recent times and it’s the way the 16-year-old likes it. But that is changing.

Those in the know who have monitored Murray’s steady rise from the junior ranks to elite amateur golf appreciate what an exciting young prospect the Wodonga teenager is. 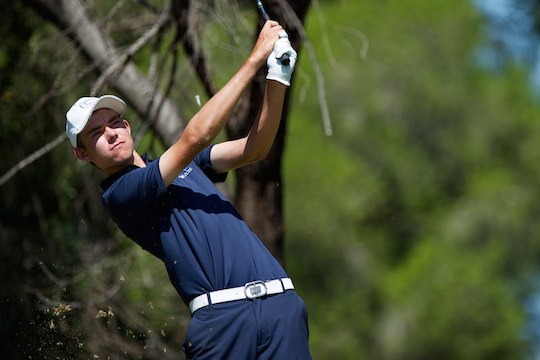 Already with four amateur titles to his credit, including the 2013 Victorian Amateur and the Aaron Baddeley International Junior, and two match play wins over the much touted Ryan Ruffels, for a player who comes from a non-golfing family background, Murray continues to make inroads into elite amateur golf.

A willingness at the very beginning as a 13-year-old to play outside his comfort zone and a preparedness to travel extensive distances to gain valuable experience have been the trademarks of Murray’s rise to prominence over the past three years.

“It was something that Dad and I decided to do very earlier on,” said Murray, who with his father Craig planned his first interstate junior event the 2013 Tamar Valley Junior Cup in Tasmania which Murray won.

“Each week we would travel to get as much tournament play as possible. Looking back at what Dad and I did, I know that it’s made a huge difference to my development and given me the confidence to compete.”

At 16, Murray became the second youngest men’s champion with a gripping 1-up victory over the seasoned player Todd Sinnott at the Victorian Amateur.

At the Australian Amateur earlier this year he progressed to the quarter finals with Sinnott gaining the upper hand in that match, yet along the way Murray again accounted for Ruffels in the third round.

The win in China at the Aaron Baddeley International Junior was a stellar achievement against a strong international field. Recent selection into the Victorian Men’s Inter-State Team another indication as to where Murray is heading – upwards.

“This year will be my first full year out competing from the junior ranks and I’m aiming to get my world ranking inside the top-50.”

Murray is currently ranked just inside the wold’s top 350 amateurs according to the R&A World Ranking system. Given he has yet to compete in the bigger US and UK events which attract higher ranking points than Australian events, his current ranking is not a true reflection of his standing.

“I’ll be travelling to play the British Boys and St Andrews Boys championship and that will be new to me,” says Murray.

“With some luck I’ll get into the US Junior and when I’m there hopefully I can get starts in their bigger events as well.”