If Gary Player, Peter Thomson and Sir Bob Charles arrived on your doorstep, most golf clubs would quickly find them a tee time.

While that might not happen too often these days, these three golfing icons are still happy to have their names attached to one of the world’s most influential social golf clubs, the Nomads. 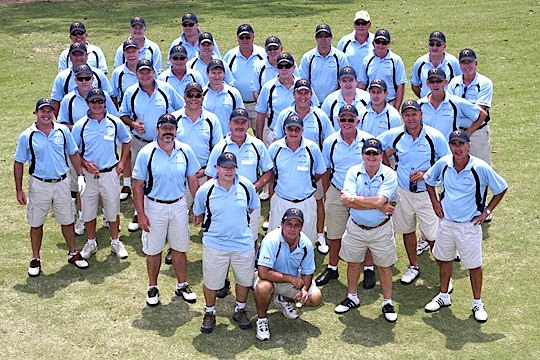 Not too many golf clubs will admit they actually roll out the red carpet when a social club lands on their doorstep.

But for the Nomads, life is a lot different.

These guys don’t go hitting off before sunrise; they don’t zip around the course and are gone before the barman pours his first beer for the day.

When the Nomads arrive at most Sydney clubs they are there for the day – and usually part of the night. Their outings usually involve a massive dinner, fully catered for, and prizegiving at the end of proceedings.

There’s often a major sponsor on the range before the round to introduce some of the newest equipment on the market as well.

Now the Sydney North arm of the Nomads have taken things a step further and, keen to help further the game in their home state, have begun helping out with sponsorship of some of our leading amateurs.

Two of the best prospects from Jack Newton Junior Golf, Jordan Zunic and Ruben Sondjaja have been granted “scholarships” by the Nomads to help them play and improve their golf in the next 12 months.

They returned the favour last month by teeing it up for a few holes alongside members at their Long Reef match.

News that Nomads are opening a Queensland branch of this hugely successful social club is indeed more good news for the game and an enthusiastic bunch who are desperate to improve their own games and help further the game in their immediate environs.

While Nomads originated in South Africa, it has positively boomed in Sydney.

It’s a strange tale, but how the Nomads came to Australia is a story in itself.

It was a chance meeting between two former Southern Natal (South Africa) Nomads crossing a street in St Ives that led to the formation of the Sydney arm of the Nomads.

Wayne Richardson and Johan Landsberg were crossing Mona Vale Road when their memories of a past meeting at a South African Nomads event dawned on them.

A meeting of the minds followed and a bonding session soon took place at a north shore club.

After a few drinks and plenty of good-natured banter Richardson decided maybe it was time to look at starting a Nomads club in Sydney.

When Mark Thompson met them at their next meeting, the three agreed it was definitely time to launch Sydney’s first Nomads club.

The first ‘fly the flag’ game was held at Gordon Golf Club with 19 players from around the North Shore making an effort to attend.

That was deemed a marvelous success and a second monthly game soon followed.

Since then there has been just one month when there has NOT been a game played somewhere – and the one they missed was abandoned due to rain.

The inaugural meeting was held at the Pymble Hotel and it soon became obvious this organization was going to grow and expand to other regions. The original club was re-named Nomads Sydney North.

Interest in the Nomads format, uniforms and discipline rocketed and membership after just eight months was up around the 60 mark.

Nomads Australia was inaugurated in December 2003 at Bayview Golf Club with 60 foundation members.

The first charity day was held a couple of months later, starting a tradition that has since been successfully implemented by a succession of vice-captains.

Indeed Nomads Sydney North have now collected and distributed more than $100,000 to charities and junior golf.

A Brisbane Nomads has now been formed and each Australian Nomads president now serves a three-year term.

It’s fair to see Nomads have exceeded all expectations.

How the Nomads work

The purpose of Nomads, a golfing club started back in 1960 in South Africa, is to:

At each monthly game, three competitions are run in tandem:

Joining fee – $100.00 This entitles you to a Nomads shirt and cap and joining the Nomads club of Australia.

Annual subscription – $230.00 This is an annual fee to remain a member of Nomads Australia.

Monthly game fee – about $60 This is paid by each member to participate in the monthly game.

The official playing dress is turquoise Nomads shirt and dark blue cap with dark blue long trousers or shorts. White socks are to be worn with the wearing of shorts.