10 Years On: McIlroy returns to scene of pro debut

(Atlanta, GA:) A decade on and Rory McIlroy faces a completely different spotlight than the one a curly-haired, freckle-faced 18-year-old faced in making his pro debut at the 2007 British Masters.

It came as no surprise to those present 10-years ago seeing McIlroy arrive on that warm Spring Tuesday afternoon to face a Belfry press room jam-packed with journalists and TV cameras in announcing he was turning professional. 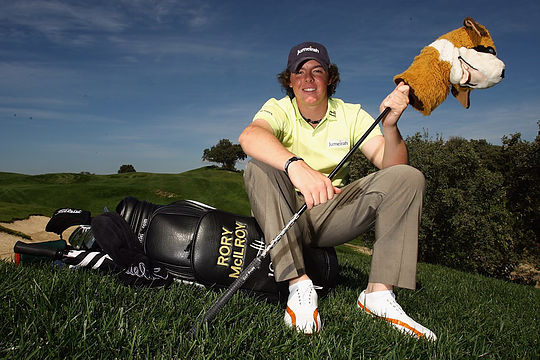 Two weeks earlier, McIlroy competed for the last time as an amateur in humbling now PGA Tour colleague, Billy Horschel 4&2 in the first match of the Walker Cup final singles encounter at Royal County Down.

Even before teeing-up at The Belfry, McIlroy was being compared with the likes of Tiger Woods and Sergio Garcia.

“It’s nice to be mentioned in the same breath as Sergio and Tiger and if I can make a start like they did I will be very happy,” said McIlroy at the time.

“As for my expectations, I just want to go out and enjoy myself in my first event as a pro.”

“Ten years has passed quickly but I can remember being very impressed with the way Rory conducted himself and coming off the course thinking to myself he clearly had what it took to be highly-successful,” said Kjeldsen.

“Since then Rory and I have become good friends. We respect each other and I’ve never played with Rory not being left in awe with how well he plays.”

“My first event as a professional has gone well, better than most,” said McIlroy after his closing round.

“I’d give myself a B-minus for the week. There’s room for improvement, as there always is.”

McIlroy did improve, as a fortnight later, and appropriately at the Home of Golf, he finished third in just his second event as a pro in the Alfred Dunhill Links to secure his full Tour card for 2008.

He also used that first pay cheque as a deposit on a first house not far from his beloved mother and father’s home in suburban Belfast.

McIlroy has since gone on to bank €31.6m in his 179 European Tour counting events ahead of his 180th event starting this Thursday at the British Masters in Newcastle.

However, McIlroy tees-up this Thursday not having won in 2017 and unlike 10-years ago, desperate to keep alive a streak of having won at least one event a year since his first full pro season.

There are also rumours, unfounded at present, that McIlroy may be about to announce major changes to his playing schedule going forward in 2018, and ones that could greatly impact his future presence on the European Tour.