Almost 11-years ago to the day, Pablo Larrazabal was in tears having failed to capture the Spanish Open a day after Seve Ballesteros had passed away.

Larrazabal was himself a week shy of his 27th birthday when the legendary Ballasteros left us for that great fairway in the sky.

There had been a hugely emotional line of players, caddies, officials, media and spectators on the practice range early that Saturday morning in Barcelona in honour of Seve. Among them was Larrazabal.

Larrazabal had broken through for a first Tour victory when he denied a completely shocked Colin Montgomerie to capture the 2008 French Open title and now here he was in Spain, close to home in Barcelona and looking to deliver a shocked Spanish nation, a Spanish Open success a day after Seve had passed away.

It was not to be with South African Thomas Aitken winning and a teary-eyed Larrazabal finishing third.

Now two weeks shy from the 11th anniversary (May 7th) of Seve’s passing and Larrazabal has won on Spanish soil for the first time since turning professional in 2004.

Larrazabal brilliantly cut a swath through the closing 18 holes in the rain-affected event emerging on Sunday to shoot a third round 68 ahead of a brilliant closing eight-under-par 62, under a continuing preferred lie ruling to win by a shot at the ISPS Handa Championship of Spain. 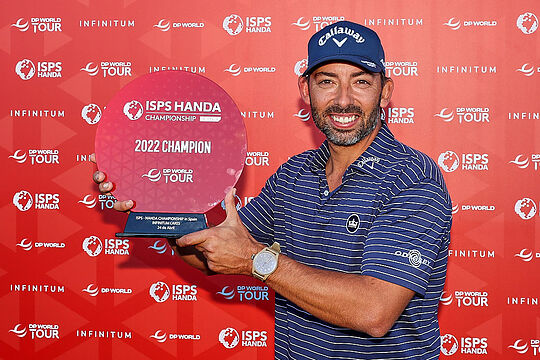 It was a long wait with Larrazabal keeping warm on the Lakes Course practice range, when victory was confirmed and fellow Spanish Adrian Otaegui (66) finishing runner-up on 14-under.

It is Larrazabal’s maiden win on home soil, his second win in what is the 50th anniversary year for the DP World Tour, a seventh win on the Tour and the 15th win of his pro career.

“What a day. But I knew that my golf was there. I couldn’t make any putts the first three days but I told my girlfriend last night that she had to choose my clothing for the (winning) pictures!” he said smiling

“I knew that I had a low one in my bag and that’s what I did. Today I holed putts and that was key. I mean, to shoot 62 in windy conditions with the flags out there, it was good.”

“I was more relaxed today (on the range, waiting for the final group to finish) than in Pecanwood. I had to wait in Pecanwood for a play-off and I told my caddie Raul (Quiros) that we had to wait, we had to keep concentrated; it was no time for jokes or for interviews.”

“We had to keep concentrated just in case we had to go – and we were ready to go, and we didn’t have to (today). I have to thank so many people. First of all, my main sponsor Callaway that has been trusting me through the years. I put in a new three-wood last week, it’s working great so I have to thank them.”

Jake McLeod led the way for the Aussies in 38th place on 3-under followed by Wade Orsmby in 56th place on even par.

The DP World Tour will remain in Spain for another week for the $2 million Catalunya Championship.