“I’m so happy and proud of myself. I did not look nervous, but of course I felt nerves on the first tee and on the first hole. I did not think about the score. I committed to every shot I hit and stayed relaxed.”

“My family do not play golf. When I was younger, aged six, my father told me to play sport and he offered tennis or golf and I watched golf on TV and I liked it.”

Due to her amateur status, the top prize of €45,000, went to second placed Ana Menendez of Mexico, who had led after each of the first three rounds and earned her career best finish.

Australia’s Whitney Hillier, who is half-Thai, finished in third spot on two-under-par. 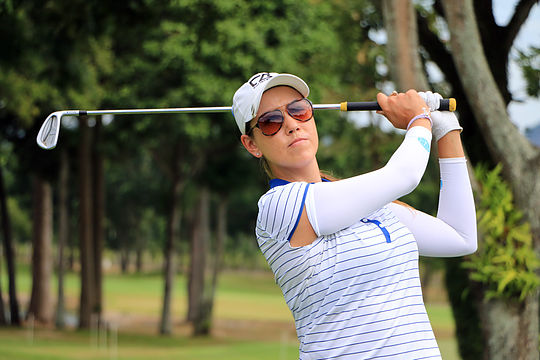 “I only made two birdies today and I was so patient out there. I made nothing on the front nine and then finally made a couple in the end. It was a solid game and I was very happy with that,” said Hillier.

I tried to get myself back up there and I did. I’ve been working really hard the last couple of months as well, but it does help to have local support, my mum and all of her friends cheering me on.”

Thitikul had previously demonstrated her enormous potential when she finished tied for 37th in the recent Honda LPGA Thailand event, which she played in just a few days after her 14th birthday, on February 20.

She then received an invitation to play in the inaugural LET event at Phoenix Golf and Country Club in Pattaya from the tournament sponsor, the Sports Authority of Thailand. Her aim was to make the cut, gain experience and have fun.

Thitikul already has vast experience that most other youngsters would cherish. Earlier in June, she won the Taiwan Amateur Open after previously being second in the Queen Sirikit Cup in China. Her next big tournament is the South East Asian Games in Malaysia.

The previous record for the youngest player to win on the LET was held by Lydia Ko, who won the 2013 New Zealand Open as an amateur aged 15 years, nine months and 17 days.