Thai amateur Ratchanon Chantananuwat has become the youngest male ever to win an event on a major Tour following his victory at the Trust Golf Asian Mixed Cup in Thailand.

The 15-year-old fired a final round 7-under 65 to claim victory by two shots over reigning Asian Tour Order of Merit leader, Joohyung Kim, on 20-under at Siam Country Club’s Waterside Course. 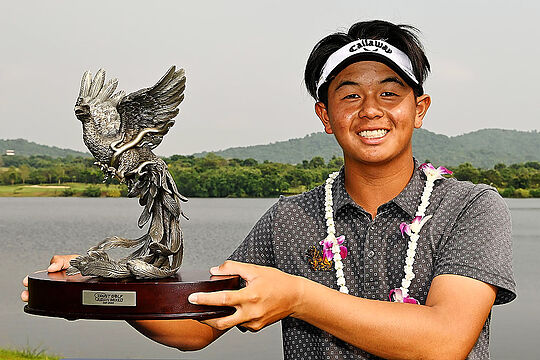 At 15 years and 37 days, Ratchanon broke the previous record set by Japan’s Ryo Ishikawa when he won the 2007 Munsingwear Open KSB Cup at 15 years and eight months.

“I am very excited, but I felt a lot of pressure,” said Ratchanon. “I got to be honest, I got pretty lucky, I had hit two or three terrible drives. I saw that [Kim eagled the 10th hole] and was not surprised, he pulls off that stuff all the time. It put pressure on me but I tried not to look at it too much. I definitely have a lot of people to thank.”

Andrew Dodt led the way for the Australians in a share of 16th place on 12-under with Travis Smyth another shot back in a tie for 19th.

Whitney Hillier was the lone Aussie female to play the inaugural event where she missed the weekend cut by a stroke.

The US$750,000 tournament was the first of its kind on the Asian Tour and was jointly sanctioned with the Ladies European Tour (LET).