The 122nd Amateur Championship began today at Royal St George’s and Prince’s golf courses with a truely international field made up of 288 competitors from 40 countries. 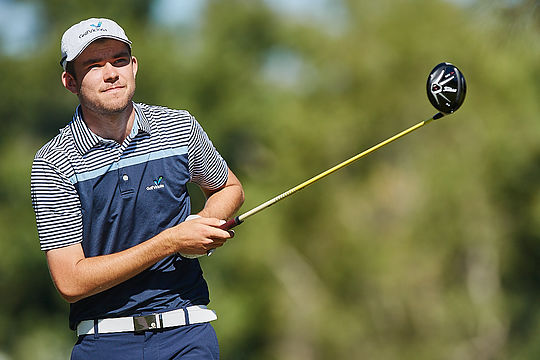 Eighteen Aussies are set to compete with the aim to make the top 64 and then advance into the match play phase following two days of stroke play which is alternated on the two layouts.

With a number of early scores already filtering in, Victoria’s Zach Murray (pictured) is off to a flying start recording the best score of the day at Royal St Georges with a 4-under-par 66. This sets Murray up perfectly but his score could have been even lower.

“One bounced on the flagstick on 16 and landed within four feet and I missed it,” said Murray. “So it could have been a very low round but overall I was pretty happy with the way I played.”

“I’m out in the morning tomorrow so I have just got to keep my head down and put in a solid round and I should be here for Wednesday.”

Perry, who moved from The Vintage to the Gold Coast this year, made a brilliant run to the last 16 at this event last year and will hope to go even deeper into the 2017 tournament.

Bryden Mcpherson was the last Aussie to win the title in 2011 at Hillside Golf Club, defeating Scotland’s Michael Stewart, 3&2. Prior to Macpherson’s stellar win you have to go back to 1954 for the last Australian to claim this prized amateur title when Douglas Bachli defeated American William Campbell 2&1 at Muirfield.

Last year England’s Scott Gregory defeated Scotland’s Robert MacIntyre, 2&1, at Royal Porthcawl. The 21-year-old from Hampshire clinched the win on the penultimate hole of the 36-hole final, becoming the 47th Englishman to lift the trophy in the Championship’s history.

The reward for the winner of The Amateur Championship is a place in The 146th Open at Royal Birkdale in July and the 2018 US Open at Shinnecock Hills.

Traditionally, the Amateur Champion is also invited to compete in the Masters Tournament.