19-year-old Bhatia breaks through in Bahamas

In just his first official and sixth overall start on the Korn Ferry Tour, 19-year-old Akshay Bhatia secured a three shot victory at the Bahamas Great Exuma Classic, and in doing so becoming only the third teenage winner on the tour, along with Australian Jason Day and Sungjae Im.

Bhatia, a Californian who plays out of Wake Forest, North Carolina, fired a bogey-free 7-under 65 in Wednesday’s final round. It was one of three bogey-free scorecards in the final round, and one of three scores of 65 or better posted all week. 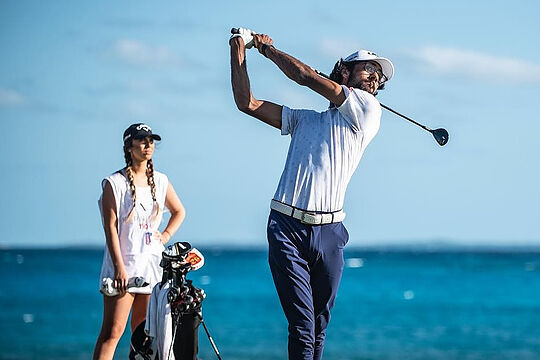 “I don’t know how I managed my emotions, but I did. I felt really calm,” said Bhatia.

“On the 15th tee, we were waiting a while, so I just sat and looked at the ocean. This place is really calm, peaceful…the aura about this place leads into why I’m so calm.”

“To play against these guys, guys who have been out here forever, past PGA Tour winners and players, it’s just awesome. For me to be able to mentally and physically compete and win at one of the highest levels in golf, it’s something I’ll cherish for a while.”

Bhatia was runner-up at the 2018 US Junior Amateur and made his PGA Tour debut at the 2019 Valspar Championship on a sponsorship exemption but missed the cut. After turning professional in September 2019, Bhatia missed the cut in all six of his PGA Tour starts. Last season he made four cuts in 11 starts, his best finish a T9 at the Safeway Open.

A tie 41st finish at the Korn Ferry Tour Championship gave him an exemption for the Final Stage of the 2021 Korn Ferry Tour Qualifying Tournament. He tied for 63rd which didn’t earn guaranteed starts, but his priority ranking got him into The Bahamas Great Exuma Classic. Now, after his win, he has Korn Ferry Tour membership for two years.

“I’m just excited to play next week,” said Bhatia. “I have never had a schedule. Just to be able to have a schedule and obviously look forward to playing certain events…there’s just all those things I get to look forward to this year. I would like to win three and get promoted to the PGA Tour, so I guess that’s my goal.”

Day still holds the record as the youngest winner in the Korn Ferry Tour history being 19 years, 7 months and 26 days when he won the 2007 Legend Financial Group Classic.