China’s Li Hao-tong confirmed his standing as a star in the making by becoming the youngest winner on OneAsia with a four stroke win at US$1 million Nanshan China Masters.

The 19-year old mastered the gale force conditions in the final round to shoot a final round one-under 70 for a nine-under total to win by four strokes. 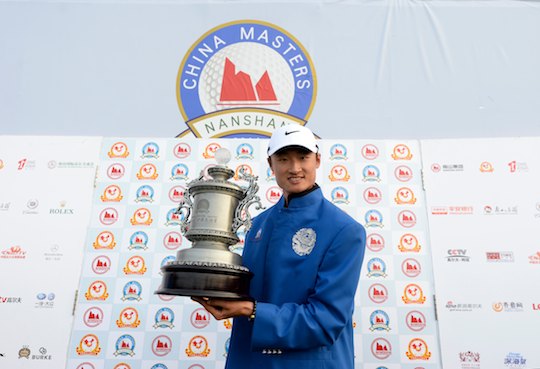 25-year old Australian Lee Jun Seok shot the round of the day, a 69, to claim outright second place while Todd Baek from Korea ended two shots further adrift in third.

“I think I am too young to win a Masters event,” joked Li, who pocketed a cheque for US$180,000. “I could not stand sometimes when I was putting as the wind was so strong. I never played in wind like this.”

This year’s One Asia Q School winner, Lee was the only player today to shoot a sub-70 round and picked up the biggest payday ($105,000) of his career with his runner-up finish.

“It was really, really windy. Before I went out I was worried about it as this is not an easy course,” he said. “I had to keep the ball in the right spot and make pars and hang in there. I could not have played any better, I am really happy.”

Michael Sim continued his renaissance with a tie for 6th at even par, while Stephen Dartnall and Rhein Gibson both finished tied for 11th , although Gibson will long rue ‘the one that got away’ after a final round 81 sunk any aspirations he had of claiming the title.

The Kolon Korea Open is the next event on the One Asia schedule, to be played from October 23-26 at the Woo Jeong Hills Country Club in Seoul.