19-yo Dobbelaar hangs on to secure Dogwood victory

19-year-old Louis Dobbelaar has overcome a final round stumble to secure his first title in the US at the prestigious Dogwood Invitational in Atlanta and become the first-ever Australian to win the trophy.

The Brookwater-based Queenslander had earlier dominated the Druid Hills Golf Club with rounds of 68, 64 and 66 and despite an even round 72 where he traded birdies with bogeys for much of the final day, he had done enough for a two-shot win over Nicolas Cassidy and Garrett Rank. 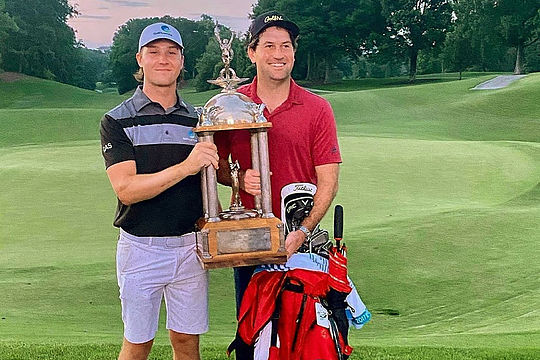 “It’s going to take a while for that to sink in. But it’s a great honour to win this tournament,” Dobbelaar told amateurgolf.com.

“It had been a while since I held the lead…I just played my game and was able to close it out.”

Also sharing the limelight with Dobbelaar midway through the tournament was New Zealand-born Gold Coaster, Josh Edgar. However, the 23-year-old, who currently attends Georgia State, came out of the weather-delayed third round with a 74 and was forced to settle for an eventual T8.

Perth-based Connor McKinney continued his top run of form over the past year sharing equal 28th. McKinney has posted three top-10′s including a 7th place at the Australian Amateur and a share of 9th at the Riversdale Cup and Master of the Amateurs.

The amateur circuit now heads to Pennsylvania for the Sunnehanna Amateur. Michael Sim was the last Australian to win at the Sunnehanna Country Club in Johnstown in 2005.