It’s hard to believe it was 20 years ago that Aussie Robert Allenby carved-out a slice of golfing history to win the Nissan Open and now known as the Genesis Invitational.

The 28-year old Allenby won a record-setting PGA Tour 72-hole, six-man playoff to become the first Australian to win what was then known as the Nissan Open at the Riveira Club in suburban L.A. and also made it seven playoffs for seven victories worldwide at the time. 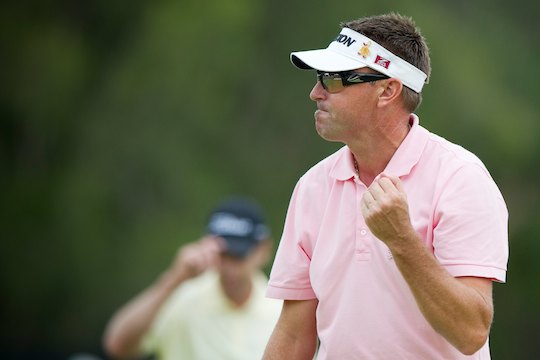 And in his bigger 22-tournament winning career from his first in 1991 to his last in 2009, Allenby won 10 of those events by virtue of a playoff with the first coming at the 1994 Honda Open on the European Tour and his 10th playoff victory defeating American Bubba Watson in 2005 at the Australian Masters in his home city of Melbourne.

Three of Allenby’s four wins on the PGA Tour were over extra holes along with the same number on the European Tour, one on the Sunshine Tour and also three on the Australasian Tour.

All up, Allenby competed in 13 playoffs to enjoy an impressive 10-3 record.

But this week’s Genesis Invitational is a special anniversary as it marks 20-years (February 22nd, 2001) since Allenby emerged from persistent rain on the Santa Monica course winning with a birdie at the first extra hole after landing the ‘greatest 3-wood shot of my life’ approach shot to just five-feet.

So who were the six players he beat? Well, they were now-TV commentator Brandel Chamblee, Dennis Paulson, Jeff Sluman, Bob Tway and Japan’s Toshimitsu Izawa.

The six in the play-off had finished at 8-under 276, some of them at least an hour before Davis Love III stumbled badly, and Allenby and Jeff Sluman each bogeyed the 18th to fall back into a share of the lead.

The playoff was the largest since six players went extra holes in the 1994 Byron Nelson Classic, but that tournament was only 36 holes due to rain.

Not even Allenby expected a birdie, not on a 451-yard hole that was playing longer because of the rain that soaked Riviera. The average score was 4.544 in the final round, and only Doug Barron had made birdie.

Caught between a 2-iron and a 3-wood from about 225 yards, Allenby choked-up on his fairway metal. Water splashed on contact, the ball tracking right at the flag and landing just over a hump on the green.

“That shot was probably the greatest 3-wood I ever hit in my life,” said Allenby in speaking recently with the PGATour.com

“It is the greatest. And I still have the club. It’s up in my house and I have the original grip on it and everything, it’s such a little beauty.”

“I remember Fred Couples and myself seemed to be the last two to have it in play before we finally gave it up. Every tournament we would go to, we would both find each other on the range and check to see if the other still had it in play.”

“Then finally one tournament he came along and he saw that I had switched it out and I was like, ‘Oh man it’s just too small, I just switched it out.’ Then he starts laughing and says, ‘I did the same thing.’ So we both hung on for ages but had to let it go. It was a dinosaur by then.”

PGA winning Tway was the only other player to reach the 18th green in the playoff, but his 35-footer stopped a foot short.

Toshimitsu was striving to become the first Japanese player to win a PGA Tour event on the US mainland.

Allenby won a then whopping $612,000 first prize cheque a year after he defeated Craig Stadler on the fourth playoff hole at the Shell Houston Open and then in July that same year he defeated Nick Price on the first playoff hole to capture the Western Open.

Looking back 20-years ago Allenby remarked: “The win is right up there but here’s what’s funny: I hit that shot and then later in the year Tiger Woods had the ‘Better Than Most’ putt at TPC Sawgrass on the 17th green in the Players Championship and that ended up being voted the shot of the year.”

“But I remember Tim Finchem (then PGA Tour Commissioner) saying to me that he thought my shot in L.A. was the best shot of the year. He also remembered that at TPC that same year, he saw me make a putt from off the wood of the walkway on the 17th green that was about an hour ahead of Tiger and from farther away. But hey, Tiger Woods got all the accolades because at the end of the day, he’s Tiger Woods.”

“I came back (to Riviera) the next year as defending champion and my picture is on the wall behind the staff at registration with me holding the trophy. I walk in and sat down and the three ladies looked at me and asked, “OK, who are you?” I said, “I’m the guy behind you on the wall”. They all turned around and looked and were like, ‘Oh no. Sorry. I remember having a good giggle about that.”

Sitting at No. 50 on the PGA Tour’s all-time moneylist with US$27,492,076, the Victorian probably doesn’t care whether he gets recognised or not anymore.