Joaquin Niemann became the first player from Chile to win on the PGA Tour, shooting a 6-under 64 on Sunday for a six-stroke victory in A Military Tribute at The Greenbrier.

The 20-year-old Niemann entered the final round of the season opener with a two-stroke lead and held off challenges from Tom Hoge and Richy Werenski with birdies on the final three holes to finish at 21-under.

Sunday was his 44th professional start having entered the pro ranks as the world’s number 1 ranked amateur. Last year he played in 28 events and recorded four top-10s including two top-5′s and $1.4 million prizemoney.

“My game was feeling great, and mentally (it) was awesome,” said Niemann. “I was just feeling like I was going to win this tournament since the first day. I was in a really good mindset.”

Niemann is now just the third player born outside of the United States in the past 95 years to win on the PGA Tour before turning 21, joining Seve Ballestros and Rory McIlroy. He also follows Matthew Wolff at the 3M Open as winners on the PGA Tour this year under 21.

Niemann took home US$1.35 million in prize money with the victory. 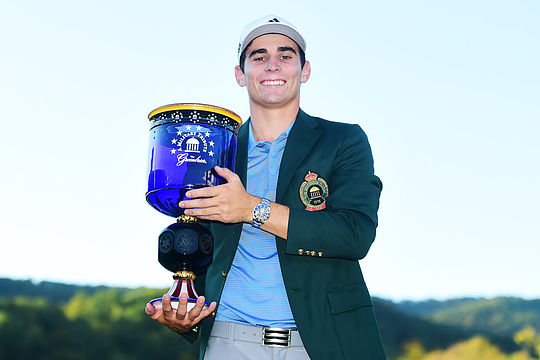 Hoge, coming off a trip to the Korn Ferry Finals where he regained his card, closed with a 65 to outdistance four others for solo second place at 15-under 265.

Werenski, who was paired with Niemann for the final round, and was in second place for much of the final round having recorded two birdies and was bogey-free until the final hole. He two-putted the par-3 18th to fall into a four-way tie for third.

Matt Jones was the best of the Australians finishing in a share of 10th position at 12-under. This was Jones’ second top-10 finish in this tournament following a runner-up result in 2013.

Cameron Smith finished at 8-under to share 24th position in his tournament debut, the result his 35th career top-25 finish. Rhein Gibson shared 57th position to gain his first PGA Tour cheque for the season.

In a worrying sign for Marc Leishman he was forced to withdraw from the tournament after citing back issues. Leishman is one of the main draw cards for the Internationals in the forthcoming President’s Cup in December at Royal Melbourne.