2012 Master of the Amateurs launched

It started as a vision more than a decade ago, now it is arguably the best amateur event in the southern hemisphere.

Company Directors Angela and Peter Mann believe, “The vision of the Australian Master of the Amateurs is to ensure the world’s best amateur golfers have the opportunity to ‘live the dream’.” 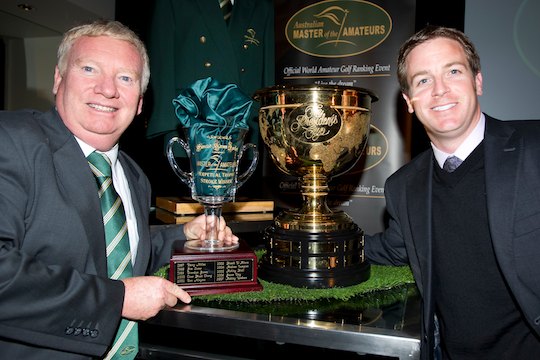 Judging from previous year’s results and the manner the event is stage, the Australian Master of the Amateurs can proudly hold itself in high esteem as one of the world’s best contested and run amateur tournaments.

Advocated by promotors as Australia’s top ranked amateur golf title, the Australian Master of the Amateurs is now in its 15th year. It has already proved to be a prominent stepping stone in the golfing careers of Australians Jason Day and Brendan Jones and the US PGA Tour’s young gun, Rickie Fowler.

Last week the tournament was officially launched amongst much fan fare at its hotel base, the RACV Club in Melbourne.

The Australian Master of the Amateur trophy was proudly displayed next to the Presidents Cup.

As the wine flowed, the speakers outlined what was coming up over the next six months.

“We’ll have players from Europe, America, UK, China and South Africa attending. The lure of playing Royal Melbourne as well as the status of our event will ensure another fantastic tournament and a worthy winner of the title.”

Amateurs from around the world will contest the 72-hole stroke amateur golf championship with numerous exemptions already being offered and accepted by the world’s best.

The final qualifying round will be this Friday at The Royal Melbourne Golf Club with the top eight players plus ties receiving exemptions to the 54 player.

Full credit needs to be go to the vision and foresight of Peter and Angela Mann.

Traditionalists may question the professionalism attached to the running of this amateur event with all the sponsor’s lunches, the am-pro, delegate dinners and the associated hype that goes with the tournament.

The legacy of the Australian Master of the Amateurs is it has placed Australian amateur golf on the map.

The event has progressed to the point of having the majestic Royal Melbourne as its base and each year the field list becomes even more impressive.

Ricke Fowler still talks about the great time he had competing and playing in Australia in 2009 and he is not the only PGA Tour player who has shared ‘living the dream’, with Jason Day also claiming the title in 2006.

English sensation, Tom Lewis, loved his time playing the challenges associated with Royal Melbourne and the English Golf Union has indicated that it will be send out another strong team to contest the event.

The 2012 Australian Master of the Amateurs Championship is to be played on the West Course of the Royal Melbourne Golf Club from the 7th – 13th January, with the winner receiving an exemption into the 2012 Amateur Championship (UK), the Porter Cup (USA), The Players Amateur (USA), the Dogwood Invitational (USA) and the Canadian Men’s Amateur Championship (CAN).