2015 Master of the Amateurs launched in Melbourne

Company Directors Angela and Peter Mann believe….the vision of the Australian Master of the Amateurs is to ensure the world’s best amateur golfers have the opportunity to ‘live the dream’.

For a tournament that started more than eighteen years ago and has evolved into Australia’s highest ranked category ‘A’ R&A event and is ranked inside the world’s top-20, the Australian Master of the Amateurs stands easily above all other championships on the Australian amateur circuit as our premier tournament. 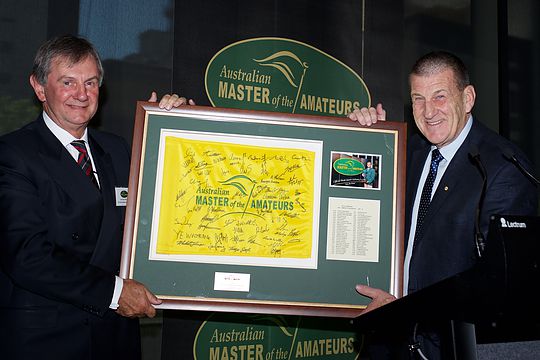 Last Friday the tournament was officially launched amongst much fan fare at the RACV Club in Melbourne.

The event has been fortunate to have The Royal Melbourne Golf Club, one of the world’s best layouts, as its venue since 2011 which has seen the tournament grow further in stature.

“This tournament is fortunate to have such a wonderful base supporting the event and no more so than from the members at The Royal Melbourne Golf Club,” said Kennett at the presentation.

“For the world’s best amateurs to have the opportunity to play the magnificent West Course and all its challenges is something as an amateur they will never forget as they strive to live their dreams.”

“The members of Royal Melbourne Golf Club has been tremendous supporters of the Australian Master of the Amateurs and for this, both myself and the tournament committee, we are truly grateful.”

As the celebrations continued Tournament Director, Peter Mann, outlined what was coming up over the next six months.

Amateurs from around the world will contest the 72-hole stroke event with numerous exemptions already being offered and accepted by the world’s best.

“We have secured the three of the top-10 world amateurs,” said Mann.

“Brian Campbell from the USA is ranked 9th in the world is playing, as is the current US Junior Champion and world number four, Will Zalatoris. The US Amateur Champion Gun Yang is confirmed as well as Corey Conners who finished runner-up to Yang at the US Amateur.”

“The UK have confirmed that it will be sending three of its top-10 players and with a number of new sponsors coming on board for this year’s event, we are looking in great shape for another exciting tournament to be played at the magnificent Royal Melbourne Golf Club.”

The legacy of the Australian Master of the Amateurs is it has placed Australian amateur golf on the map. No other amateur event attracts the interest of international players, including that of our own national championship.

The 2015 Australian Master of the Amateurs Championship is to be played on the West Course of the Royal Melbourne Golf Club from the 6th – 9th January, with the winner receiving an exemption into the 2015 Amateur Championship (UK), the Porter Cup (USA), The Players Amateur (USA), the Dogwood Invitational (USA) and the Canadian Men’s Amateur Championship (CAN).