Lin Yuxin, winner of the 2017 Asia-Pacific Amateur Championship in New Zealand, returns to the 11th edition of the championship in Shanghai later this month confident of putting together a strong performance in front of home fans.

Two years ago, the left-handed Lin, then only 17, birdied the 17th hole and eagled the 18th at Royal Wellington Golf Club to become the Asia-Pacific Amateur third Chinese champion. 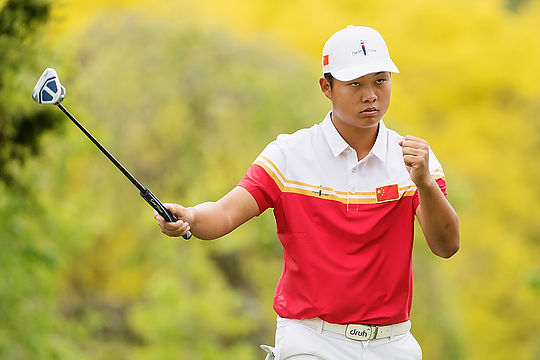 It was an unprecedented finish for the Chinese team at the championship, as their players also claimed the second (Andy Zhang) and third (Yechun Yuan) positions on the final leaderboard.

After experiencing the highly coveted opportunities awarded to the champion by competing at the 2018 Masters and The 148th Open at Carnoustie, Lin is determined to find the form that earned him the title in 2017.

He has played in eight professional events on the China Tour this year and made the cut in six. He also reached the round of 32 in the U.S. Junior Amateur Championship and is currently ranked 146th in the WAGR – the best among the 10 Chinese players in the field.

This year’s championship will be played from 26-29 September at Sheshan International Golf Club in Shanghai, China.

A field of 120 players from 39 Asia Pacific nations is expected to compete in the championship, which returns to China for the third time. The country hosted the inaugural AAC in 2009 at Mission Hills Golf Club in Shenzhen, followed by the 2013 edition at Nanshan International Golf Club in Longkou City, Shandong.

The world’s No. 1-ranked men’s amateur, Takumi Kanaya of Japan, has returned to defend his title.

Min Woo Lee, now in the pro ranks, was the best of the Australians last year finishing in a share of 16th position. In 2014 at Royal Melbourne, Australian Antonio Murdaca took the crown, with Cameron Davis and Ryan Ruffels finishing runner-up in 2015 at The Clearwater Bay Golf & Country Club, Hong Kong.

While in 2016 Curtis Luck won the tournament by a shot from fellow Australian Brett Coletta.

David Micheluzzi, currently ranked fourth in the WAGR and world No. 11 Blake Windred will spearhead the Australian contingent this year.