Si Woo Kim overcame one of the deepest field in professional golf to defeat Ian Poulter and Louis Oosthuizen by three strokes to win the Players Championship on Sunday.

Kim maintained a bogey free card to the end for a 3-under 69 to become the youngest champion in the 44-year history of the biggest tournament this side of the majors. 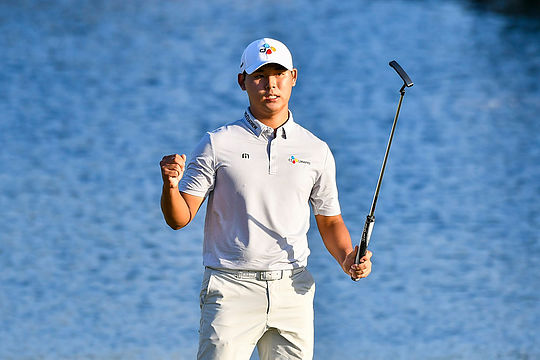 “It’s unbelievable that I won this championship, and I am very excited I’m the youngest champion for this tournament,” Kim said through an interpreter.

Starting the day two strokes behind the leaders, Kim played solidly as the field faded around him. He opened with a birdie on the first and then moved into sole possession of the lead with another pair of birdies on 7 and 9.

Holmes and Stanley struggled in the windy conditions and with Poulter dropping a shot on the 12th, all Kim had to do was hold on over the back nine to get the win.

Poulter received some unjust criticism when trailing by two shots and with only 208 metres to the green on the par-5 16th he elected to lay up. Commentators as well as a former two-time Players Champion, Steve Elkington, automatically claimed Poulter was playing for 2nd position.

The fact was Poulter’s ball was embedded in the rough, prompting him to lay up. He would go onto make par before another par at the 17th only to bogey the last to tie with Oosthuizen. It was proper course management from the Englishman and the US$924,000 runners-up cheque certainly puts to bed any issue regarding his earlier decision.

Oosthuizen began the day at eight under but spent most of his round scrambling after a double-bogey at No. 4. He made that back with an eagle at No. 11 and got another birdie at the par-five 16th to atone for his three bogeys on the day.

Kim finished his round with nine straight pars, including a tap-in from little more than three feet for the victory.

Kim, a South Korean who won his first PGA Tour event last August at the Wyndham Championship, joined Sergio García as the only golfers born outside the United States since 1945 to have recorded two Tour victories before their 22nd birthdays.

Kim is also the latest in a procession of young guns to have won on the tour in the last 18 months which includes Emiliano Grillo, Jon Rahm, Jordan Spieth, Justin Thomas, Hideki Matsuyama and Cameron Smith, all of whom were 24 or younger at the time of their victories.

Former winner at the Players, Adam Scott, finished the best of the Aussies in a tie for 6th despite two inexplicable double-bogeys in his first round when he was leading the field.

Aaron Baddeley finished 41st followed by Rod Pampling in a share of 48th position. A final round of 80 damaged Jason Day’s chances seeing him drop 40 places to finish in a share of 60th.

Marc Leishman, Greg Chalmers and Cameron Smith, who earned his way in to the field via his recent Zurich Classic win, missed the weekend.