21-yo Higgo secures second win on the European Tour

Higgo, 21, took a two-shot lead into the final round at Meloneras Golf and the 21-year-old carded a flawless closing 63 to finish 25 under par. The victory moved Higgo to a career-high 65th in the world rankings and secured his place in the US PGA Championship at Kiawah Island. 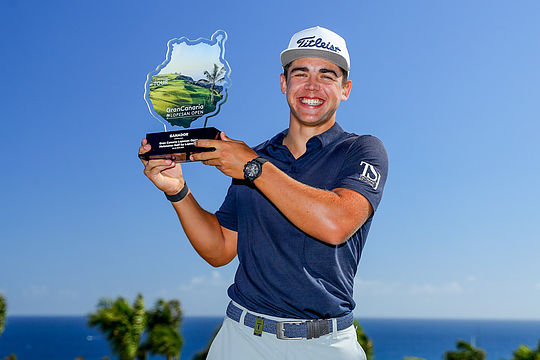 His other European Tour win came last September at the Portugal Open which gained him a one year exemption on tour and with Sunday’s win Higgo is now the fastest South African to secure two wins on the European Tour in recent times. Gary Player was the only player to do it in fewer events.

“It’s unreal,” remarked Higgo. “I can’t put it into words, it feels amazing. It’s quite a relief finishing now. It wasn’t over until the last hole really, I knew anything could happen, especially with the wind coming up. It was a bit stressful.”

Higgo attended the University of Nevada in 2017 and 2018, turning professional during his sophomore year and then winning twice on the Sunshine Tour. He also recorded a runner-up finish in the Challenge Tour co-sanctioned Cape Town Open during the 2019–20 season, and finished 6th on the Order of Merit.

Maverick Antcliff was the best of the Australians at 14-under-par for a share of 21st position and the only Aussie to make the weekend.

Jake McLeod and Austin Bautista, who made the field as a result of last week’s strong finish, missed the cut.