Last week at the Scottish Open, Collin Morikawa walked away from his first links golf tournament a humbled man having racked up a handful of bogeys on the way to a near-last 71st place at the The Renaissance Club.

He obviously learnt a lot from that experience and has come back a week later to take home the ultimate links prize in winning the 149th Open Championship by two shots from Jordan Spieth in his first attempt.

The 24-year-old fired rounds of 67, 64, 68 and 66 to capture his second major title at just 24-years-old and deny Spieth his first major trophy since an inspiring win at the 2017 Open Championship at Royal Birkdale.

“To be cemented on the Claret Jug with countless names, countless Hall of Famers, countless people that I’ve looked up to, not just from golf, but outside of golf, it’s so special,” said Morikawa, whose 15-under total is the lowest 72-hole total recorded in an Open at Royal St George’s and just a stroke short of the tournament record mark. 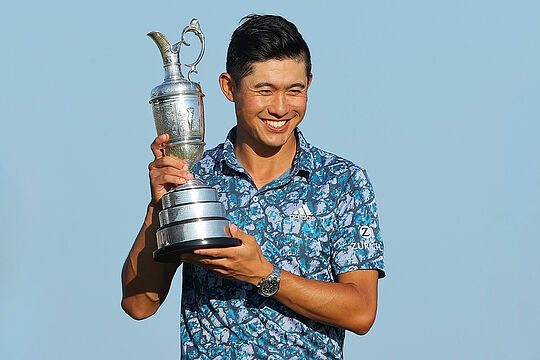 “We only get four majors a year, and every single one of them is very special. To finally get to play an Open Championship for the first time and win it, it’s going to be that much more special.”

“To be a part of that history, it’s awesome.”

Morikawa now joins Ben Curtis in becoming the Champion Golfer of the Year on his links debut, a feat achieved by Curtis in 2003 also at Royal St George’s.

And more importantly Morikawa is the first player ever to win two seperate majors in their first attempt. Something not achieved by any of the greats of the game including the Tiger Woods and Jack Nicklaus.

Amongst a raft of other records, he also joins Woods as the only player to have won the Open Championship and PGA Championship before the age of 25.

For Louis Oosthuizen, it was yet another major near-miss.

The South African had lead the field each day of the tournament and looked set to finally add to his 2010 Open Championship win but it wasn’t to be.

Oosthuizen slumped to a share of third at 11-under alongside new World No.1 Jon Rahm following an erratic 1-over 71. Oosthuizen couldn’t recover from a two-shot swing at the 7th hole where he recorded a bogey after finding two greenside bunkers against a birdie from Morikawa.

The 38-year-old now has two runner-up (PGA, US Open) finishes and a third (Open Championship) in majors this year.

“Well I do know one thing, the fans at @TheOpen are second (or third) to none. Thank you for the incredible support this week, and congrats to @collin_morikawa who played with class and grit today. Well done mate,” posted Oosthuizen on Twitter after refusing to talk to the media following his loss.

While 11 Australians qualified for this year’s Open Championship, only two, Cameron Smith and Adam Scott, made it through to the weekend.

Smith fired one of the worst rounds of the day to fall 24 places into a share of 33rd at 2-over while Adam Scott rescued his weekend with a 2-under 68 making up for a 73 on Saturday and leaving him in equal 46th.

However, Smith’s attention is now firmly on the Olympics where he will represent Australia alongside Marc Leishman.

“I can’t wait to get over to Japan. It’s one of my favourite countries. I love it there. I love the golf over there. Yeah, I’m playing really good golf at the moment. Hopefully, I can go over there and just have a good week with Leish. We’ve had good weeks in the past, so hopefully we can go have another one.”

The PGA Tour heads to Minnesota for the 3M Open while the Olympic teams now turn their focus towards Japan with the golf teeing off from July 29th.