Twenty-five years ago, the world mourned the passing of Princess Diana and Mother Teresa. We learned Carlos the Jackal had been caught and sentenced. Mike Tyson bites Evander Holyfield’s ear and Microsoft becomes the world’s most valuable company at $261 billion.

In golf, a 21-year-old golfer electrified the sports world when on April 13 1997, Tiger Woods rewrote the record books by becoming the youngest winner of The Masters, running away with the title by 12 strokes on the hallowed grounds at Augusta National.

The margin of victory is still the largest at the Masters as we head into this week’s 83rd hosting of the elite tournament.

Woods’ victory, in his third Masters appearance and his first time at Augusta as a professional, was witnessed by an estimated 44 million TV viewers in the US alone.

We also remember Colin Montgomerie’s now famed comments, having played alongside Woods as he shot 65 in the third round to head to the final day nine in front, while Monty carded a 74 to be back in a distant share of sixth, a dozen shots adrift.

Monty was asked if he felt Woods would go on and win. 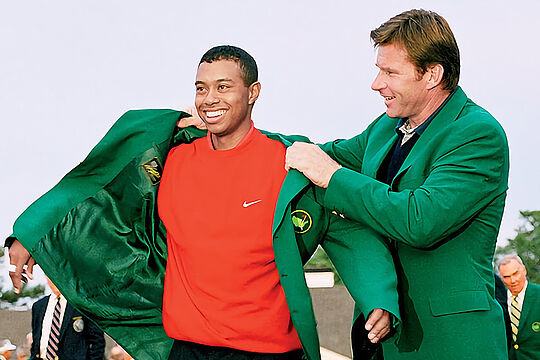 Nick Faldo hands over his green jacket to Tiger Woods at the 1997 Masters (Credit: PGA Tour)

And while members of the media laughed, a very straight-faced Monty had two final words to say: “No, way!”

Monty was then reminded Aussie Greg Norman had blown a six-shot lead a year earlier in 1996.

“This is different”, said Monty. “This is very different. (Nick) Faldo is not lying second for a start, and Greg Norman is not Tiger Woods.”

In 2017, and on the 20th anniversary of Woods’ stunning first of now five Masters victories, Monty was asked what it was like being paired with Woods that Saturday afternoon.

“It was the easiest 65 I’ve ever seen”, said Monty. “What Tiger did at the second hole (August’s longest at 575-yards) was frightening. I hit my drive first, as I had the honour, and then I had a 4-wood from the brow of the hill. Now, this is the forward tees, so they had not moved back the second tee 60-yards by then. Tiger teed up and with his ball ended up about 150-yards in front of me, and he then hit 9-iron to the back of the green.”

“Now from then on, from that second hole onwards, I thought, hang on a minute. This is something extraordinary. That was the last time I saw Tiger Woods all day.”

Other shots that Saturday afternoon to mesmerise Monty were Woods’ pitching-wedge, second shot into the par-5 15th, and his sand-wedge at the last to set up a closing birdie.

Woods spoke of his first Masters win just weeks ahead of his second Augusta success in 2001 when asked if he had any idea what was unfolding in the 1997 third round.

He said: “Not a clue, I mean honestly no clue. I was just trying to win a tournament and I felt so comfortable, so at ease and really peaceful within myself, and I just let it unfold.”

“I didn’t force the issue. I was very patient and the next day, I won the tournament. I couldn’t even dream of winning. I would have never dreamt that week would lead to it being so hectic and this crazy.”

Woods’s win made the cover of Sports Illustrated with the words ‘New Master’. His win proved pivotal in terms of Augusta National, in some ways, being forced to open-up membership to African Americans and women who are now members at Augusta National.

Last year, we saw Lee Elder, the first African-American to tee up in the Masters, joining Jack Nicklaus and Arnold Palmer at the opening ceremony.

Yes, Woods’ 1997 Masters win was history-making but it also lead to so many more golf clubs around the world becoming more diverse, and now 25 years on, and with some uncertainty if Woods will tee up on Thursday, that is something the world can say is one of so many Tiger Woods legacies.