American Chez Reavie has taken out the Barracuda Championship on Sunday in the PGA Tour’s lone modified Stableford scoring event for his third PGA Tour title.

Reavie had a six-point round following four birdies and two bogeys for a one-point victory over Alex Noren on Tahoe Mountain Club’s Old Greenwood layout. Players get five points for an eagle and two for a birdie, while a point is deducted for a bogey and three taken away for a double bogey or worse.

“I’ve been working hard,” said Reavie. “I’ve been hitting the ball and I knew I could do it. I just kept grinding, and here we are.”

With the event also co-sanctioned by the European Tour, Reavie earned spots on both tours through the 2024 seasons. It was his first victory since winning the Travelers Championship in 2019. He also has a win in the RBC Canadian Open and at 40 years of age becomes the first player in his forties to win on the PGA Tour this year.

He picked up 300 points in the standings and moved up to 49th in the FedEx Cup rankings with the win along with US$666,000 for his efforts. 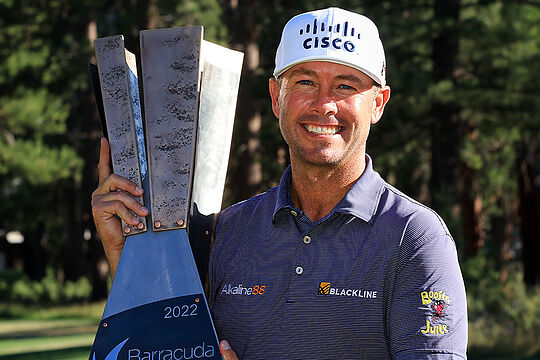 Australian Cam Davis had a successful weekend finishing in a share of 6th position to be the best of the Aussies.

After leaving the PGA Tour in 2018 to move back home to Melbourne, Ogilvy was in the US working as part of his course design firm and, having won the Barracuda Championship in 2014, the 45-year-old decided to tee it up last week.

It’s not a sign of returning to a full-time schedule though. Ogilvy says he will make the occasional start but his focus is elsewhere.

“I’m dad first now,” said Ogilvy, who will also return to serve as an assistant captain for the Presidents Cup in September, “and someone who will play golf every now and then.”

The Barracuda Championship is the second of back-to-back US-based tournaments to grant access to DP World Tour members for the first time, as part of the Strategic Alliance with the PGA Tour.