Ryan Armour earned his first PGA Tour win on Sunday at the Sanderson Farms Championship, shooting a 4-under 68 to beat Chesson Hadley by five shots at the Country Club of Jackson.

Armour, 41, was seeking his first PGA Tour title in his 105th Tour start.

“It’s a big monkey off my back, I’m not going to lie,” said Armour, who finished at 19-under for the tournament. “There’s a lot of emotions running through my head. Part of me wants to fly home immediately and see my wife and kids. And part of me wants to go hang out with the boys.”

In 2013, he didn’t even qualify for the Web.com Tour. Now he’s playing some of the best golf of his career. 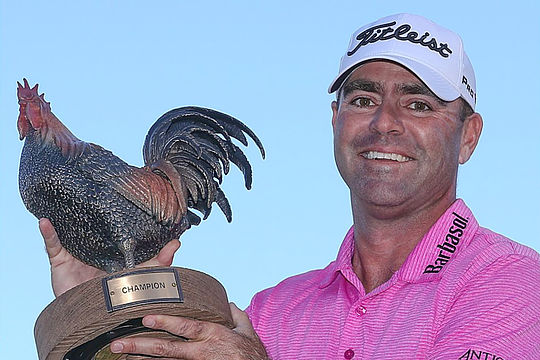 “You’ve got to believe in something out here if you don’t hit it 330,” Armour said. “I’m sticking to the fact that I hit fairways and greens.”

And that Armour did, hitting 10 out of 14 fairways and 15 out of 18 greens. He got up-and-down on two out of the three greens he missed.

He birdied three holes on the front and three more on the back.

Armour’s win was the largest margin of victory at Mississippi’s only PGA Tour event since 1988, made him US$774,000, and in the process earned his PGA Tour card through the 2020 season.

Armour began the final round with a five-shot lead and was never seriously challenged.

Fellow American Jonathan Randolph briefly made a charge with seven birdies over his first nine holes to get to 14-under, but Armour responded with three birdies on his first seven holes. He then paced his way around the course with short, but straight drives. He had six birdies and two bogeys en-route to closing out the tournament.

Chesson Hadley shot a 68 to finish at 14-under, five behind Armour. Randolph was third after shooting a 67 and finishing at 12-under. Smylie Kaufman, Brian Stuard and Scott Strohmeyer tied for fourth at 10 under.

Aaron Baddeley was the best of the Australians, finishing at 4-under and in a tie for 30th position. A closing 73 dropping Baddeley seven places down the leaderboard.

Matt Jones, Robert Allenby, missed the cut as did Steven Bowditch who fired rounds of 75-73 to be at 4-over, which was not the start for the 2018 season he was after following a 2017 PGA Tour season where he made just two cuts in 27 starts on the PGA Tour to finish outside the top-200 in the FedExCup standings at 234th.

Bowditch is now competing in the 2017-18 season on the Past Champion category.