David McKenzie became the second Australian winner in the first four PGA TOUR China Series events to break through for with an impressive performance to win by five shots at the Lanhai Open in Shanghai.

Holding a three-shot lead going into the final round, the 47-year old McKenzie fired a final-round 69 for a fourth consecutive round in the 60s around the Lan Hai International Golf Club’s Links Course to finish at 16-under par. 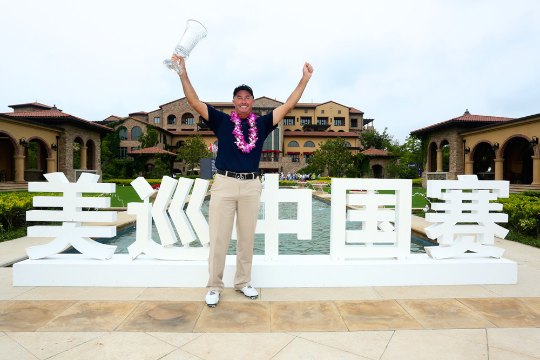 Fellow Australian Steve Dartnall was alone in second place at 11-under with Quincy Quek from Singapore in third.

“I actually thought (a win) would be soon,” said McKenzie, the 2013 Victorian PGA Champion. “I just didn’t think it would come as soon as this.”

“The round today, I got off to a bit of a slow start. My playing partner (Quek) birdied two of his first three holes. I had to stay patient and wait and believe that I would make birdies at some point in the round.”

His patience paid off when he made his first birdie of the afternoon at the seventh and another at the ninth to turn at 2-under.

His final two birdies of the day came at ten and then at the twelfth. “Those gave me some breathing room over the rest of the round,” he continued.

“I didn’t putt as well as I had earlier in the week, but when it was important that I make some putts, I did,” McKenzie added, “My putting wasn’t as good today, but it saved me when I needed it.”

Facing a six-stroke deficit when the day began, Dartnall bettered McKenzie’s final round with a 68 but gap was too large to make up in the end.

Dartnall’s performance continues his strong start to the PGA TOUR China Series, having also finishing 3rd at the Haikou Open in April.

The PGA TOUR China Series’ Beijing Open will be played at the Beijing Earls Golf Club next week.