508 days later and Woods sits under par at Masters

It’s an even more remarkable story that not only did Tiger Woods tee up at Augusta National but 508-days since the last competitive round he proudly walked off with a round of 71 on the opening day of the 86th Masters.

On the 25th anniversary of a maiden Masters, and some 14-months after his near-fatal car crash, Woods was just five shots from the lead early in the rain-delayed maiden major of the year. 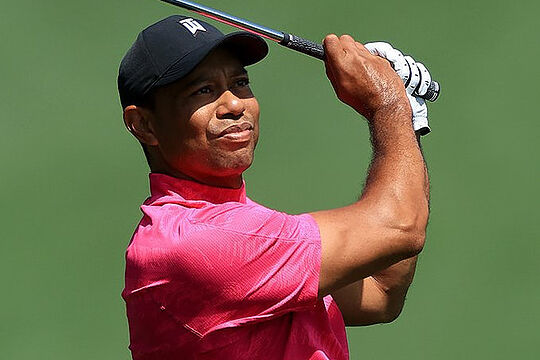 Wearing the brightest of bright pink shirts, Wood captured those walking the course, and countless millions around the globe watching via TV posted three birdies and one less bogey.

It was reported in 1997 that some 44 million US viewers tuned in to his maiden Masters victory. It will be interesting now to learn how many watched this opening round effort by a player who continues to deft the skeptics.

Huge crowds had followed Woods for three days and it was different teeing-up in what is his 24th Masters. He parred the opening five holes before bringing the patrons to their feet when the almost impossible looked likely it may happen, leaving his tee shot at the par-3 sixth hole to just tap-in birdie distance.

Woods was back to old self in being well right in trees down the seventh but played a great second shot, a deft third chip shot close also to the hole, to save par.

He dropped a shot at eight and we heard the ‘F-bomb’ on the ninth. Woods was back to one-under with a birdie at ‘Azalea’, the par- 5 13th, but gave the back on 14. He birdied the par- 3 16th for who knows how many times in his career to get back to one-under, ahead of a closing pair of pars.

The effort was so good that Woods was taken into the Butler Cabin, which is usually only used on Sunday night to interview the champion. Does host network NBC TV know something that we don’t?

“I did not have a very good warm-up, as I hit it awful”, said Woods. “As my dad used to say ‘did you accomplish your task? Did you warm up? If not, then go play’ so that is exactly what I did, I blocked it out. I felt I’m warm, go play let’s just get it done, you know where to put it, execute each shot and you know, as the round built and I was able to get into the red.”

“I started off with disappointment. Just making bogey from 50 yards on the 8th. Lack of concentration on the first one. Second one, lack of commitment. Then a blocked putt. So just three bad shots in a row.”

“But as far as the good stuff, to finish in the red today after as long a layoff as I’ve had and not being in competitive golf — I don’t really consider a scramble in the PNC — it is competitive, but it’s not like this. This is totally different.”

“So to play this golf course and to do what I did today, to make — to hit the shots in the right spots — I know where to hit it to a lot of these pins, and I miss in the correct spots and give myself good angles. I did that all day, and I was able to make a few putts and end up in the red like I am now.”

And after a first competitive round in over 500 days, Wood was also asked how he was feeling.

“I am as sore as I expected to feel, but it was amazing to have — like I was telling the team all week, come game time, it will be a different deal,” he said. “My adrenaline will kick in. I’ll get into my own little world, and I’ll get after it. It’s about the training that we’ve done to have the stamina to go.”

“I’m going to be sore, yes. That’s just the way it is. But the training cycles that we’ve had to make sure that I have the stamina to keep going — and this is only one round. We’ve got three more to go. There’s a long way to go and a lot of shots to be played.”

There was great news for the Australian camp as well with Cameron Smith continuing his superb form to finish day one in outright second place on 4-under and just one shot of the lead held by Sungjae Im.

Smith’s round is all the more impressive given he bookended his round with a double-bogey at the 1st and 18th holes.

Min Woo Lee and Marc Leishman sit in 31st place, Adam Scott and Lucas Herbert share 43rd and Cam Davis will need something special after his 3-over 75.