At the 1979 Manufacturers Hanover Westchester Classic, the late great Sam Snead made a PGA Tour cut at the ripe old age of 67 years, 2 months and 23 days.

And now some four decades later, Jay Haas playing alongside his son, Bill, has broken the long-standing record at the Zurich Classic. 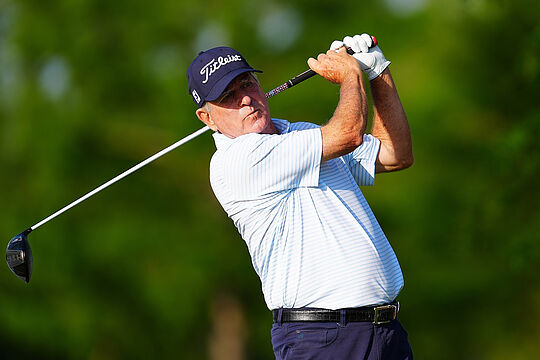 The older Haas sunk a metre and a half putt on the 18th hole of the TPC Louisiana course in New Orleans to make the cut on the number and to set a new PGA Tour record at the age of 68 years, 4 months, and 20 days.

While it’s an incredible feat, the sexagenarian was quick to point out that Snead’s mark was set individually and as such deserves to still stand as a record up against Haas’ effort in the team event alongside his 39-year-old son, Bill.

“I don’t think it should (count) because Sam Snead did it on his own and all that, but anything that I’m even remotely close to Sam Snead on would be very special,” said Haas, who was playing in his 799th start on the PGA Tour after debuting at the 1973 Wyndham Championship in a field which ironically included Snead.

“That was probably as nervous as I’ve ever been over a putt of that length certainly. It sounds silly just to have a chance to make the cut. However, there’s a lot of circumstances here that it kind of made it doubly important in my mind.”

Team Haas, who between them own 15 PGA Tour wins, finished in a share of 36th place on 12-under after weekend rounds of 68 and 72.