A Father’s Day to remember for World No.1 Johnson

Timing is everything in sport and if ever there was a time for Dustin Johnson to win a second US Open it would surely have been a mere few days after the birth of his son, and on Father’s day no less…right?

Johnson sure seemed to think so. 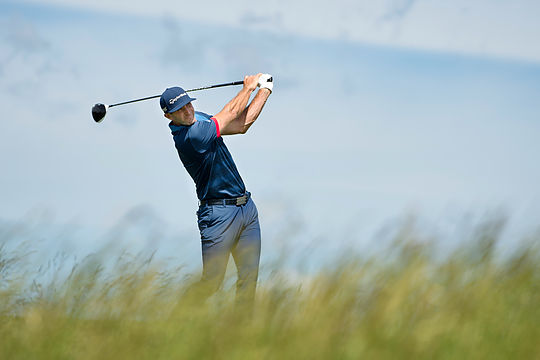 And as revealed by ESPN’s senior writer Ian O’Connor, Johnson’s schedule of events was all part of a grand plan to claim back-to-back titles at the US Open last Sunday.

Johnson and partner Paulina Gretzky delivered a baby boy on Monday via C-section, in time for Johnson to make it up to Erin Hills to prepare for the tournament, where he was defending champion.

The timing couldn’t have worked out any better for the world no 1, who managed to avoid a scenario in which he would have teed off but been forced to retire if the baby arrived, much like Phil Mickelson did in 1999 for the birth of his daughter Amanda.

“It depended on when she had the baby,” the defending champion explained on Wednesday about the initial possibility of missing this US Open.

“Yeah, it was definitely a thought, but everything worked out and I’m here playing.”

It was the first major appearance of the year for the 32-year-old, who was forced out of the US Masters in April due to injury after slipping down the staircase of his rental home.

His plan unraveled when Johnson missed the cut at Erin Hills after admitting he still had some work to do before he recovered the career-best form he enjoyed before that unfortunate Masters-eve mishap.

“I just wish that I would have been playing, especially [because] leading into the Masters I was playing the best golf that I’ve ever played,” said the world No 1.

“So it was definitely disappointing not to be able to play.”

“And it’s taken me a while to get back to where I was then.”

“I’ve still got some work to do to get back to when I was playing that good.”

Rounds of 75-73 attested to that as ‘DJ’ missed the halfway cut by three in the defence of his title.