Aaron Wise back in January was playing Australia’s highest ranked amateur tournament, the Australian Master of the Amateurs, which he won easily.

At the time the American hinted about turning professional yet was coy about the timing. Wise was more interested in celebrating his first international win with his caddies and his fellow US Team colleagues after narrowly missing in a play-off at the Western Amateur back home in the US. 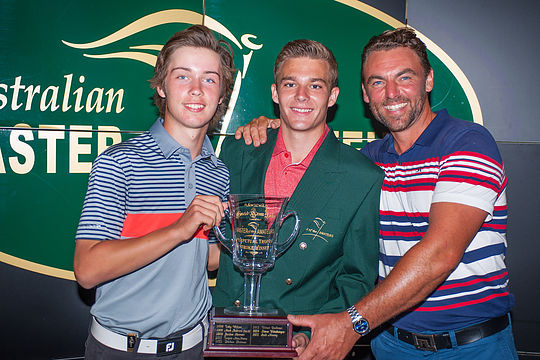 “This win is significant for me,” said Wise following the victory presentation.

“Hopefully, this will be the start of things to come. My game is ready to go the next step, so to win like this at Royal Melbourne certainly shows my game’s heading in the right direction.”

Having watched Wise smash away our best amateurs around Royal Melbourne with a display of pure ball striking and a majestic short game, he was head and shoulders above the field. Wise stood out from the pack – he had the all-round game as well as the demeanour you only see every so often.

In the US earlier this month, Wise, who hails from Lake Elsinore in California, won the NCAA Championship. Ranked 5th on the R&A World Amateur rankings, the 19-year-old posted a 69.8 stroke average for the season and then signed with Lagardere Sports. The decision to go professional had been made.

Wise will make his professional debut tonight at the US Open at Oakmont Country Club after winning a sectional qualifier at Royal Oaks in Vancouver a week ago where he posted the lowest score with a 9-under-par over 36 holes.

Wise does have fully-exempt status on the Mackenzie Tour, a PGA Tour feeder tour previously known as the Canadian Tour, after he won its qualifying tournament. The top-5 on the money list after the final event in September earn fully-exempt status for the Web.com Tour in 2017.

Wise, however, could by-pass the Web.com Tour with a solid result this week and in the other PGA Tour start he has secured through a sponsor’s exemption at the John Deere Classic in August.

“Hopefully, if I can get some opportunities playing well right off the bat, it’ll open more and more doors for me,” said Wise.

During his first practice round at Oakmont Country Club on Monday Wise had the unique opportunity to play alongside Phil Mickelson, who is now a fellow golf client of management company Lagardere Sports along with Jordan Spieth and Keegan Bradley.

“It was awesome, he’s such a nice guy,” said Wise. “It was great just to get to know him and to pick his brain about Oakmont Country Club. It was my first time playing today so I probably looked like a deer in the headlights and probably didn’t look like I knew what I was doing. Phil gave me a little bit of a rough time about it.”