Australian golf fans can watch the game’s best in back-to-back weeks in February with the ISPS Handa Vic Open and the ISPS Handa Women’s Australian Open both to be broadcast live across the country and around the world.

The $3 million ISPS Handa Vic Open will be on free-to-air TV for the first time in its modern format with ABC TV to broadcast 16 hours of live play from February 7-10. 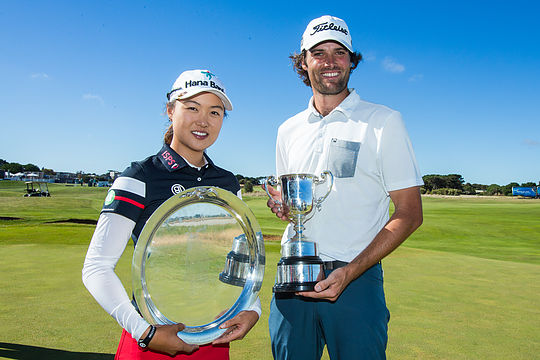 And in another first, the action from 13th Beach Golf Links will also be simulcast on Fox Sports Australia across all four days.

The LPGA Tour and European Tour have each put the Vic Open on their schedules for the first time in 2019, so the international flavour of this unique tournament will now be seen by huge audiences around the world.

The 2019 ISPS Handa Vic Open will reach 162 countries and more than 750 million households through Golf Channel and Sky Sports in the key markets of Asia, Europe and North and South America.

The ISPS Handa Women’s Australian Open returns to The Grange Golf Club in Adelaide for the first time since 2016 and the ABC will continue its long-standing coverage of the best in women’s golf with the LPGA’s global platforms ensuring reach extends in excess of 500 million homes.

“We are incredibly proud of our partnership with Golf Australia in bringing audiences to the Australian Women’s Open and next year we are delighted to extend this partnership to include live coverage of the Vic Open,” Morris said.

“Over two weeks, Australia’s golf-loving audiences will be able to tune into ABC TV to watch two of Australia’s premier golf tournaments.”

The three-year rotation between The Grange, Royal Adelaide and Kooyonga begins again in 2019, with South Australia ready to welcome back some of the biggest names in women’s sport.