Abdulghany comes out on top in Women’s MOTA battle

The Women’s Australian Master of the Amateurs may only be in its third edition but it continues to grow from strength to strength and that was no more evident than during last Friday’s final round.

The championship had everything, a new venue at the prestigious Victoria Golf Club, a new course record with Lion Higo firing an impressive second round 62 and a three-way playoff to determine the champion. 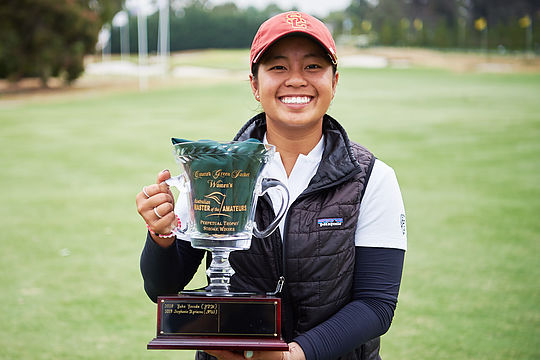 Cassie Porter from Queensland looked to have the title in her grasp but for a fast finishing pair of Alyaa Abdulghany from Malaysia and Ho Yu An from Chinese Taipei. The trio finished the regulation four rounds at 2-under-par, Porter opening the door for the playoff after a bogey on the last hole for a final round 3-over-par 75.

Ho Yu An, who was playing four groups in front of the final pairings, carded the best final round with a 2-under-par 70 having made a mess of the short par 4 15th, yet it was enough to get her into the playoff.

Abdulghany played flawless final round golf securing a birdie on the 18th to gain her place in the playoff and took full advantage of her situation driving Victoria’s opening short par 4 to land on the green some 20 metres from the pin.

Both Porter and An had found the bunkers on the right side, leaving a delicate up and down and were unable to convert. Abdulghany, the highest R&A ranked player in the field calmly rolled her putt to within metre of the hole to secure the win and her biggest International title of her career.

20-year-old Abdulghany, who is a Junior at the University of Southern California, was ecstatic with her victory.

“On the international front I’ve been close before and I’ve won back in the States at the Battle of the Rock, but this is a special victory and one I’ll remember for a while.”

The three-time Junior All-American first teamer certainly relished the tough conditions with wind and pin placements really testing this international field. Victoria Golf Club was presented in mint condition and the greens, simply superb. Low scoring was seen during the opening three rounds, yet the final round on Friday was brutal.

“It’s one of the toughest days I’ve had,” said Abdulghany.

“I’ve not played courses like this before and it’s very different to what we play back home. But I loved it, I loved the challenges this course gave you and overall I’m so pleased I came down here to play. It’s been a perfect week and I’ve really enjoyed my time in Melbourne. I’ll be telling all my class mates to come play here, that’s for sure.”

For Porter, this was a tournament where the Queenslander would have gained invaluable experience. She put on a wonderful display of golf holding the lead during the opening morning’s play in the first round and bouncing back nicely with a third round 67.

A share of runner-up in this truly international women’s amateur event is a solid result for the Greg Norman Masters champion.