Ackerman, previously ranked 1321st in the world, closed with a 68 to secure his first professional victory in three years. Sunday’s win sees him move to a career high of 654th in the world ranking with his previous best finish a tied 8th at the 2021 Queensland Open. 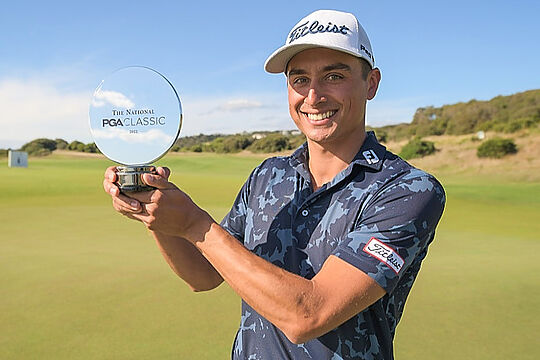 “It hasn’t hit me yet, because I didn’t know where I stood until I was coming to the last hole,” said Ackerman. “I told my caddie not to let me know. We had a bet that if I didn’t birdie one of the last two, I’d buy him a case. I didn’t (birdie) so I do (need to buy beers).”

The 25-year-old American has for the last two seasons on the Australasian Tour and Sunday’s win giving him a two-year exemption. The win comes off a rather rocky 2022 year for Ackerman having made the cut in 4 of 9 Australasian Tour events with his best finish before Sunday’s result, a share of 28th at the TPS Victoria event.

As an amateur he played collegiate golf for Santa Clara University and finished runner-up in his first year at the Arizona Intercollegiate and achieved a two-time honourable mention All-WCC.

Blake Windred’s runner-up result added to his victory a few weeks back at the NSW Open and moved the Novocastrian to second place on the Australasian Tour Order of Merit, which sees three DP World Tour playing cards on offer following the season ender.

Dimitrios Papadatos is sitting on the fringe of a European Tour Card needing just over $5,000 to pass Dodt with three events remaining, including the A$200,000 Western Australian Championship starting 21st April at Royal Fremantle Golf Club.

The remaining two events, WA Open and the NT PGA Championship, only offer $150,000 in total prize money so time is running out for those players needing a big move on the moneylist. The NT PGA will mark the end of the season at the Palmerston Golf Course starting 5th May.