South Australian Adam Bland has broken through for the biggest win of his career, taking out the Japan PGA Championship by three strokes.

The 32-year old leftie began the final round with a six-stroke lead after rounds of 64-68-64 around the Taiheiyo Club’s Kohnan Course and had the luxury of being able to bogey the final two holes for a final round 72 to claim victory. 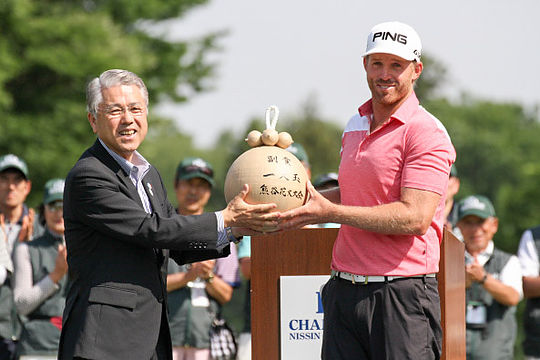 The win is sure to give added impetus to the Australians challenging for the Web,Com’s BMW Charity Pro-Am in the U.S, especially close friend Alistair Presnell who like Bland, has returned to the tour after his wife recently gave birth.

Korean Sang-Hee Lee took second place at 13-under with Japan’s Yoshinori Fujimoto alone in third place at 12-under.

After battling in obscurity at home and on the Web.Com Tour in recent years, Bland has found a new lease of life in Japan after winning his card to play the full 2014 season.

He was second only to Queensland’s Brad Kennedy as the leading Australian money leader in his rookie season and his winner’s cheque for over AU$312,000, which exceeds his total earnings last year, thrusts him to the top of the early season money list.

The South Australian had previously won the Western Australian PGA, the Vanuatu Open and twice on the Canadian Tour.

Western Australia’s Scott Strange finished strongly on the weekend to tie for fifth at 11-under while Brad Kennedy finished in tied 31st place at 6-under.

Bland and Kennedy head to this week’s Kansai Open Championship looking to extend their run of form. The event and host course at the Rokko Country Club have been kind to Kennedy, having tasted victory in 2013 and taking a share of third place last year.