Three years ago Adam Scott was four holes away from lifting the most famous trophy in all of golf – the gleaming Claret Jug.

And like 2012 at Royal Lytham and St. Annes Scott’s birthday falls due the week of the Open Championship. 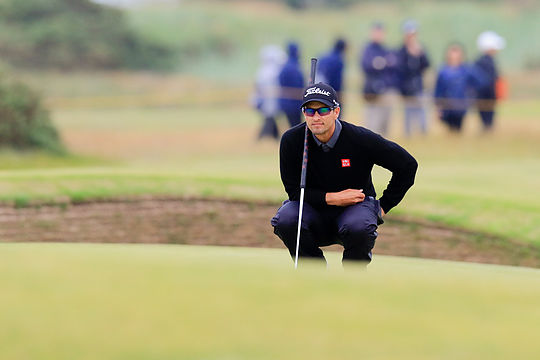 Adam Scott lines up a putt on day one of the 2015 Open Championship (Credit: www.golffile.ie)

In fact, Scott turned 35 today and celebrated with a first round 2-under 70 on the Old Course at St. Andrews.

It left the Bahamas-based Aussie trailing five shots behind big-hitting Dustin Johnson who had been out in the earlier and calmer morning conditions.

Of course, Scott is no stranger to the Old Course but when asked by Golf Grinder’s Bernie McGuire if he continues to learn more about the course each time he tees up the 2013 Masters winner agreed.

“You do learn a lot, but that’s what the practice rounds are for,” he said.

“Sometimes you’re not actually playing the practice round in the condition that you’re getting. You’re looking at the absolute extreme opposites and what would happen if you only could hit it 260 yards off the tee.”

“But then this is part of the beauty of this championship, if you are on the right side of it. I kind of felt I was on the wrong side last year, too.”

If it does even out as Scott mentioned then the Australian would join the likes of Peter Thomson, Kel Nagle, Greg Norman and Ian Baker-Finch as a winner of The Open.

“Maybe one of those gleaming silver trophies they hand out late on the Sunday of The Open.”