Hometown hero and world number two, Adam Scott, will return to the Gold Coast in December to defend his Australian PGA Championship title.

The PGA today confirmed that Scott has committed to contend the 2014 Australian PGA Championship to be played from December 11-14 at RACV Royal Pines Resort. 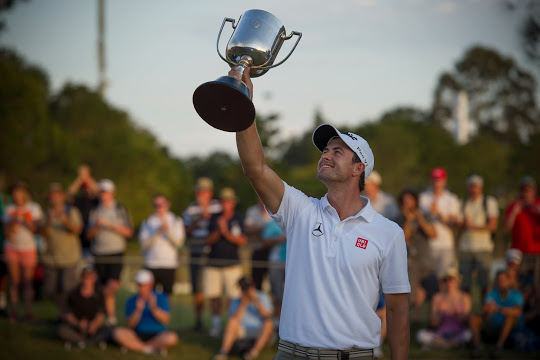 “Whenever you’re defending you always want to return and relive all those good experiences from the previous years but particularly when you’re returning home to Australia and also the Gold Coast which is my home,” said Scott from the United States.

“It was an amazing week last year coming home and playing in front of everyone, so many friends and family out there but the support was great and I’m really looking forward to coming back this year.”

Scott says he’s also looking forward to seeing the re-vamped RACV Royal Pines layout which, by the time of the tournament, will have undergone significant re-modelling and re-shaping on the front nine.

“Royal Pines has been one of the leading resorts in the area for such a long time and of course everything needs to evolve and be updated as the modern equipment moves on and as it’s hosting a tournament of the PGA stature,” added Scott.

“So hopefully it’s going to be a really tough test this year. They did a great job with it last year but the improvements should make it that much better.”

Last year’s tournament provided a fairytale finish for Adam and tournament organisers with Australia’s first Masters champion able to show off his coveted green jacket for the first time on home soil.

This year organisers say they plan to build on the success of the inaugural year, cementing the Australian PGA Championship as one of the Gold Coast’s most iconic sporting events.

During today’s announcement Scott also confirmed he will defend his title at the Australian Masters in Melbourne (November 20-13) and compete in the Australian Open in Sydney (November 27 – 30) before finishing his season at home on the Gold Coast.

Tickets for the 2014 Australian PGA Championship will go on sale tomorrow, Tuesday 26th August at www.ticketek.com.au with children 16 years and under to again be admitted free when accompanied by a paying adult.

A discount is available to RACV Auto Club members (inclusive of RACV and RACQ members) who will receive 50 per cent off the gate price.