Hours after Garcia captured the Asian Tour’s Singapore Open, Fleetwood celebrated his 27th birthday in successfully defending his Abu Dhabi HSBC title while Rahm has made it three wins for Europe with his win at the CareerBuilder Challenge on the day that golf’s greatest-ever player Jack Nicklaus celebrated his 78th birthday.

The 23-year old now Rahm heads to his defence of Thursday’s starting Farmers Insurance Open in the best form possible in defeating American Andrew Landy at the fourth extra play-off hole of the Stadium Course at PGA West after both players ended regulation play locked at the top at 22-under par.

Garcia needed to play 27 holes on the last day of the rain-affected event in Singapore and won by five shots without dropping a shot in an ominous display of his new found self-belief as he prepares to defend his Masters title in early April.

Now Rahm has made it three European-born wins on the same day and on three different continents. 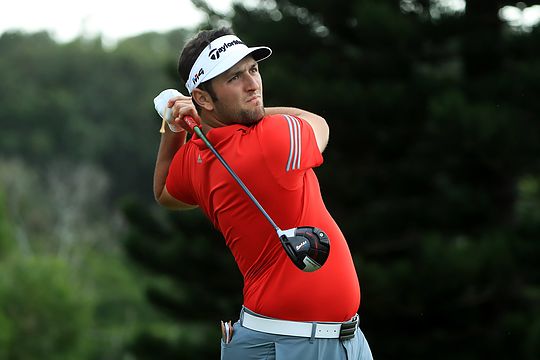 His victory comes also just a fortnight after finishing runner-up to World No. 1 Dustin Johnson in the Sentry Tournament of Champions and is the Spaniard’s second success in three events after brilliantly storming home on the final day to win the European Tour’s season-ending DP World Tour Championship.

Three days earlier at La Quinta, Rahm cemented the cornerstone for a fourth pro career victory with a career-low 62 but found himself two shots behind heading to the final round in the $US 6.2m event.

Both he and Landry birdied the last hole in regulation play before the duo went toe-to-toe in the playoff, matching each other with pars on the first three holes, before the Spaniard finally broke the deadlock when he rolled in a 12-inch birdie putt after taking dead aim at the flag on the fourth extra hole, the par-4 18th.

“I had a good feeling going into today, and to play the way I did and give myself a chance. Props to Andrew, to birdie 18 from the right rough, having to birdie it, it’s a heck of an accomplishment.”

“To follow-up a shot that ended up one foot away, had a makeable birdie putt every time, it’s amazing that he kept up and one of us had to do it and either one of us would have been a well-deserving champion. So I would say congrats to him. It’s hard to explain what this means right now.”

Rahm’s victory sees him overtake three-time Major winning Jordan Speith as World No. 2 with Rahm accomplishing the feat after being ranked World No. 137 just a year ago.

“It’s hard to believe, to be honest, passing Jordan Spieth, three-time Major champion, I only have two wins, he’s got 10 plus, right?,”said Rahm

“It’s, again, I said it many times, I never thought I was going to be at this point in my life right now, especially the way I won both victories, it couldn’t be anymore different than the other. I am incredibly proud of myself, my whole team, my caddie Adam, he does an outstanding job of keeping me calm.”

While the Spaniards were celebrating the same couldn’t be said for the Aussies with Greg Chalmers, Matt Jones, Geoff Ogilvy, Rod Pampling and Cameron Percy all missing the cut.