After Arnie, what about Trevino as Masters Starter?

Of all of golf’s four major championships, the youngest of them – The Masters Tournament – has gone out of its way from the very early days to establish, recognise and maintain its own traditions.

From the presenting of the hallowed Green Jacket, lifetime invitations to past champions, the Champions Dinner held every Tuesday night of Masters week, the Par Three Tournament, to the menus offered to ‘patrons’ on course, The Masters does ‘tradition’ like no other. 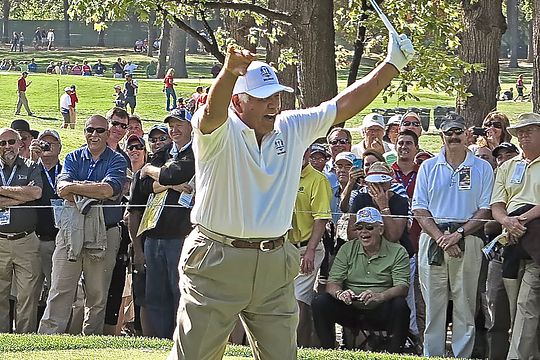 The powers that be at the Augusta National Golf Club also need to be congratulated for moving with the times on many fronts and resisting any urge to rigidly maintain all the rules and regulations instituted from times long since past.

For decades, only club caddies were permitted at The Masters before the club allowed the players to use their regular caddies from 1983. Only PGA TOUR tournament winners, winners of significant amateur championships and past champions secured invitations at one stage.

By comparison, there are now several avenues by which players can earn their invitation to drive down Magnolia Lane and The Masters’ support of the Asia Pacific Amateur Championship and more recently, the Latin American Amateur Championship, are proof of the Augusta National’s sincerity in wishing to promote the game on a global scale.

One wonders given this recent track record of innovation whether the Augusta National might extend its lateral thinking in relation to one of its oldest traditions, the Honorary Starters, who officially open the tournament on Thursday morning of Masters week with a ceremonial drive off the 1st tee?

The Honorary Starter tradition commenced in the 50s when Scottish-born Fred Hutchison and Jock McLeod, both past major champions, teed off and played 9 or 18 holes before withdrawing proper from the tournament.

Interestingly, neither player won The Masters but both won the only two PGA Senior Championships held at Augusta National in 1937-38. A series of the game’s greats including Byron Nelson and Sam Snead have progressively filled the Starter roles since.

Arguably the greatest trio in golf’s history, the ‘Big Three’ of Arnold Palmer, Jack Nicklaus and Gary Player, have kept the tradition alive together since 2012 when Player was added after his final Masters as a competitor.

Sad but inevitable as the news was to contemplate, Arnold Palmer’s announcement that he will step down this year opens an opportunity for The Masters to continue with their creative, open-armed approach in their thinking about a replacement.

And rather than automatically look to a past Masters champion, perhaps a golden opportunity exists to recognise the player who sits a mere fraction behind the ‘Big Three’ in terms of career achievement but is as equally revered – Lee Trevino.

76-year old Trevino never won a Masters and finished in the top-10 just twice in 20 attempts in an at times tempestuous relationship with the course and Tournament.

Regardless, he is a six-time major champion, a dominant, mercurial player and personality on the PGA and Champions Tours in his heyday and is regarded universally as a true legend of the game.

Asking Trevino to join the greats at Augusta might take some convincing but in the spirit of Hutchison and McLeod, it would be both an amazing and extremely popular gesture and provide true recognition for one of the legends of sport, let alone golf.

His presence on the 1st tee on that Thursday morning would be superb and of course, absorbing entertainment as always.