Bernhard Langer became the oldest winner in PGA Tour Champions history after beating Doug Barron with a two metre birdie putt on the first hole of a playoff in the Dominion Energy Charity Classic.

At 64 years, 1 month, 27 days, Langer broke the record of 63 years, 5 months, 4 days set by Scott Hoch when he teamed with Tom Pernice Jr. to win in the 2019 Bass Pro Shops Legends of Golf. Langer extended his streak of seasons with a victory to 15. 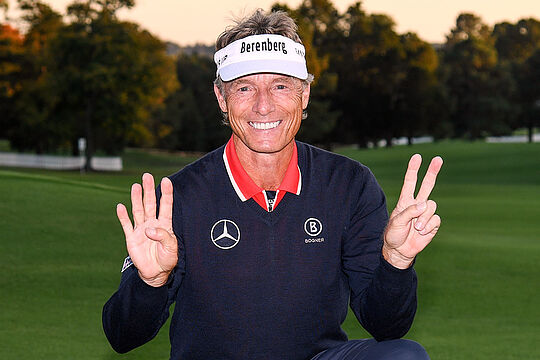 The German powerhouse has won 42 times on the PGA Tour Champions, three short of Hale Irwin’s all-time record for victories and matching the 42 titles he won on the European Tour from 1980 through to 2002. This season alone Langer has recorded 24 top-10 results and banked US$3.16 million.

“This has been a very special win,” said Langer. “It’s been a long time coming and I’ve had some very, very close calls, which was in a sense frustrating and disappointing. So when it actually happens and you win, it’s exciting.”

Stephen Leaney finished the best of the Australians in a share of 31st position, with Rod Pampling in a share of 42nd position along with David McKenzie. Pampling remains the top-ranked Aussie on the money list at 15th with US$1,708,287 in season earnings.

Defending champion Phil Mickelson shot a 71 to tie for 47th at even par. He has three victories in five senior starts, winning the Constellation Furyk and Friends two weeks ago in Florida.

The second event in the playoffs is in two weeks in Florida.