Bernhard Langer is back again in the winner’s circle on the Champions Tour after his wire-to-wire win at the Chubb Classic in Florida.

The win is Langer’s 43rd on the Champions Tour, two behind Hale Irwin, who leads the title race…for now. 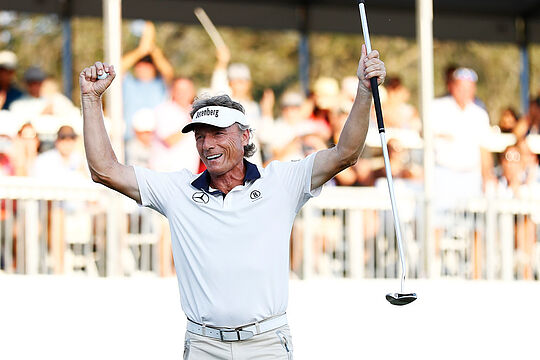 Langer, 64, closed with his second straight 4-under 68, birdieing the par-5 18th on Tiburon Golf Club’s Black Course for the third day in a row, to finish at 16-under for a three stroke win over Tim Petrovic.

Retief Goosen was third at 12-under-par after closing with a 70.

Stephen Leaney finished the best of the Australians in a share of 38th position at 1-over-par along with Rod Pampling. Stuart Appleby shared 68th position, with Robert Allenby in 74th position.

Langer, a two-time Masters champion and winner 42-time European Tour winner moves to number two in the Schwab Cup race with US$292,500 in earnings, with Miguel Angel Jimenez leading the standings having pocketed US$398,795 in earnings to date.