American Anders Albertson has claimed the Knoxville Open for his second Korn Ferry Tour title and a stroke victory over China’s Carl Yuan. 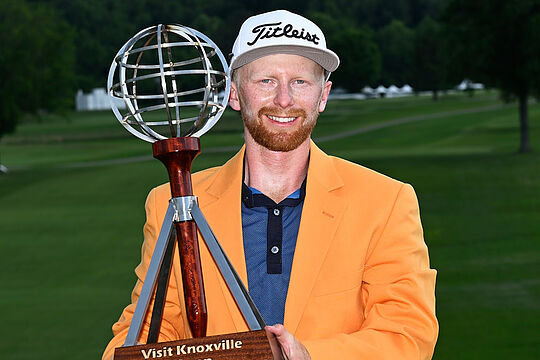 “I haven’t won in four years and to be leading every day, to be looking face to face with all that pressure or all those extra thoughts that come with that for four straight days was a challenge that I was embracing,” said Albertson.

With the win and the US$135,000 in prizemoney, Albertson rises from 52nd to 9th on the Korn Ferry Tour Regular Season Points List, putting him within 186 points of the current PGA Tour Bound fail-safe threshold of 900 points.

The 28-year-old Albertson earned his first PGA Tour card for the 2018-19 season after finishing No. 8 on the Korn Ferry Tour. The former Georgia Tech golfer finished 172nd in the money list making the cut in 10 of the 25 events he played yet was not able to retain full playing privileges.

Albertson’s only previous Korn Ferry Tour victory came at the 2018 Memorial Health Championship where he birdied two of the final three holes for a two-stroke win. His previous best finish this season was tied for fourth at the Lake Charles Championship.

Ryan Ruffels was the only Aussie to make the weekend and finished in a share of 76th position at even par. Curtis Luck, Harrison Endycott and Rhein Gibson all missed the 2-under cut.